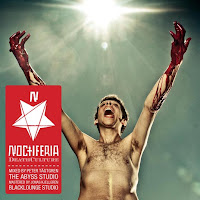 Death Culture is the latest incarnation of Slovenia's Noctiferia, a band that have slowly and gradually carved out a niche for themselves in nearly two decades of existence. Earlier efforts were written in a more derivative, melodic black/death metal style, but as of this, their 5th full-length they have arrived at something quite a bit more precise and edgy. This record is an intricate mesh of industrial and metal music which, while incorporating some modern, down-tuned grooves that we might negatively associate with the previous decade's nu and groove metal scenes, is never slack of its musicians' individual merits for a lick or two of further complexity.

It would be easy to write this band off as a European Fear Factory, and in fact the band does share some things in common, with the constant shuffle of chugging guitar rhythms and mechanical beats performed by an actual drummer. Certainly if you enjoyed a Demanufacture or Souls of a New Machine, you could find something comparable within Death Culture. One can also find a streak of Meshuggah here, in the bands bouncing, cold grooves. But there is something more to Noctiferia, a rampant death metal impulse that runs just below the rudder, and an ability to transmit a glorious signal through the writhing, bludgeoning mass comprising a largest fraction of their compositions.

Refer to the track "Deluders & Followers", which showcases the wealth of this band's range. It's ridden with technical chops, double bass rolls and momentum, and yet, at its height, it incorporates sallow synthesizer backdrops which provide for an 'epic' atmosphere that I am not often accustomed to in industrial metal. I don't love all the band's riffs, even in this song. They're busy enough that the guitarists are not about to feel bored, but only as they rush to the climax of the various, accessible keyboard rhythms does it all culminate into something of exotic beauty. Other songs create a more bouncing, constant, emotional duress such as "Non Individuum", in which you feel like Samael, The Kovenant and Fear Factory are in a free throw competition or the relentless grooves of "Demagog". Again, they're decent songs with good atmospheres, but a few of the groove metal-like guitar parts turned me off slightly. The mystical, Middle Eastern choral weavings of "Samsara" make for perhaps the single most interesting track on the album, and hearing Noctiferia branch even further into this ethnic direction might make for a more interesting package. The strange closer "S.M. 02" is also intriguing.

The effort that went into Death Culture is hard to dispute. It's a brash, loud, modern sounding album which booms at you from your stereo, through each chugging gait. The band can arrange leads and complex rhythms with ease into the more forgettable fare, so it feels like you are being strung along, each second in the dry expanse of ennui splashed upon by the wetness of some previously undiscovered oasis. The lyrics seem like a potpourri of political and individualist concepts as you'd find on a Fear Factory or modern Sepultura record, but Gianni Poposki's vocals are hammering along enough that even when you feel a line is cliche or cheesy, the band's energy wins the day. With this band and Sybreed, it seems Listenable is building quite a roster of electronic fused metal potential, so it will be interesting to see further developments. I was not enthralled by the Slovenians' album here, but if you fancy Fear Factory, Sybreed, harder KMFDM, Meshuggah, Mnemic or Samael (Passage and beyond), you will find they give the style a fairly effective punch in the nose.