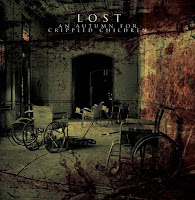 This new Dutch act is flaunting quite the moniker, more than a mouthful and yet surprisingly effective at conveying the mood of the music they write. An Autumn for Crippled Children have every intention of assembling their own despair, reaching through this recording and then pinning it all to your back, and to an extent, this debut succeeds in doing so. The only major flaw it needs to contend with is a lack of consistency. Only a few songs deep, I felt like the band had already fired all the shots, and the middle of this recording becomes a mild trial to survive, until a few of the closing tracks offer the hint of salvation.

By now, I'm assuming most fans of depressive black or doom metal are aware of the bands Lifelover and ColdWorld. To my ears, An Autumn for Crippled Children fall into this small category of artists who can somehow enable a musical accessibility alongside the extremity of the vocal presence. Take the driving, shimmering walls of guitar that defined mid-era Katatonia, fuzz out the distortion so that it sounds like a rain of razors seeking a tribute of blood in return for every added melody, and then add the tortured rasping of many in the depressive black genre. Sprinkle with clean pianos and guitars, to create a rising and ebbing tide of sadness which will affect both the contemporary music listener and the dweller on the cold fringe.

For a few tracks, this process works wonderfully. "To Set Sails to the End of the World" is like a breathtaking vista of pain, slowly revealing it to yourself through a crest of harsh, melodic acid and spacious valleys of wailing calms. "Tragedy Bleeds All Over the Lost" is a measured thunder of depression, with finely molded, subtle shifts to the guitar chords and a hypnotic bass line that pops along beneath the despair. But after this point, I feel like the quality drops off. "A Dire Faith", for example, has some nice post-rock segments, but when it picks up to a strangling fuzz crescendo and the vocals begin tearing open the chords, the riff just wasn't so memorable. There is nothing really 'bad' about any of the material, it's just a matter of having 1-2 moments of bliss and then some uninteresting filler. Exceptions would be "Ghost Light", one of the shorter and sweeter moments on the album, with the nearest this band will come to a 'breakdown' around 3:00, with a cool driving pattern over which a solemn melody glistens. The end of the record is also quite solid. I speak of the dour, restfulness of the "Gaping Void of Silence" and the mind stabbing pain of "Never Shall Be Again".

There is certainly room out there for more of these expressive ciphers of sorrow and corrupted melody, but I do feel the songs here are slightly less engrossing than those of a ColdWorld or Lifelover. The atmosphere of An Autumn for Crippled Children is something to behold, and in truth I really like how they produce their sounds. It might feel painful for some, but I think there is an enormous potential, if they could just compose better patterns of chords which can steer the imagination much further than what they've assembled here. Seek this out if you're starved for disaffection, but I have a nagging suspicion we'll be hearing more, and better, from this trio.