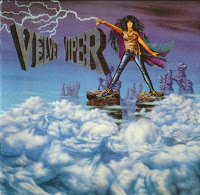 Perhaps it was just a blond thing, that the public at large will always associate female fronted 80s metal with a Lita Ford or Doro Pesch. Perhaps it was the commercial success of their former associations. In either case, Jutta Weinhold has long been the unheralded songstress of her German metal generation, to date having partaken in four metal projects (Breslau, Zed Yago, Velvet Viper and her newer Weinhold solo projects). I'm not going to lie. I'm a sucker for brunettes, but my attraction to this woman's work has always had a lot more to do with her piercing, harpy-like pipes, and it's easy to see why. Jutta has NEVER sold herself upon sex appeal, but by the strength of her voice alone. You can imagine this was a breath of fresh air in a period when both men and women were selling themselves upon hair products, hollow glamour and super-sexualized stage posturing.

My favorite of her works was certainly Zed Yago's Pilgrimage in 1989, a graceful power metal album with a good balance of slower and mid-paced power metal albums that really stood out, and continue to do so whenever I'm in the mood for something akin to Running Wild with a mellower attitude. For whatever reason, Jutta put that band to rest after just two albums, and then reformed it a few years later under the new name of Velvet Viper. Not quite as catchy, in my opinion, but clearly the two Velvet Viper albums are kindred spirits to From Over Yonder and Pilgrimage, and even the 'Zed Yago' female adventurer/pirate mascot character makes an appearance here in the largely Arthurian lyrics. Thus the four albums from 1987-1992 all serve as a sort of loose continuity, and the two bands' logos are nearly the same.

Musically, this is a direct continuation of the style found on Pilgrimage. If anything, you could consider it more expansive, with a heavier classical/folk music influence and a studio production that was arguably superior to the predecessor. This is user friendly, fest hall heavy metal music with all emphasis placed on simple riffs, effective leads, and the cutting, accented voice that stands astride the instruments much like the character on the extremely lame cover (yeah, that art truly sucks). This is hardly the forceful, heavier rocking of a Running Wild or Grave Digger, instead centered on a drifting grace. Jutta is joined here by Zed Yago bassist Lars Ratz (also of Metalium), guitarists Dave Moore (Skyclad) and Peter Szigeti (Warlock, U.D.O.) and drummer Franco Zuccaroli (of the German Steeler), all seasoned and talented but not in the least interested in showboating, so you get this very laid back, classy style which is unlikely to appeal outside the field of 80s appreciators.

As I mentioned earlier, some of the lyrics here revolve loosely around the folklore of King Arthur and his Knights of Camelot, with Jutta inserting her 'Zed Yago' character briefly into the opener "Merlin", a big beat hard rocker paced akin to the previous incarnation's "Black Bone Song". Other tracks following this topic include "Percevel", a moody piece with some pumping bass presence and good leads; the medieval metal anthem "King Arthur" which sounds very much like something Running Wild would write (how about a Rock'n'Rolf, Jutta Weinhold duet? Would that rule?); and "Parsifal", a snippet of Richard Wagner re-arranged here into an organ/electric guitar piece with some male chorals. Beyond that, there are tracks like the great, rocking "HM Rebels" which tracks back to the 'metal pirate' concept, and "Brainsuckers: Thommyknockers" (apparently Blind Guardian were not the only German band fascinated by the King story). I found one of the more interesting pieces here to be "Lost Children", with Weinhold's layered mantras flowing across some percussion that seems to echo off the mountains and clouds as rays of sun shine through. This is not a metal song, and the guitars only maintain a faint presence ringing alongside the drums. The Accept/Saxon-like fortitude of "Icebreaker" and the driving "Millstone of Rage" represent the better of the metal fare.

There are certainly some areas in which we could have expected more out of Velvet Viper. The cover art is really awful, even for 1991, and the track layout could have been streamlined to have all the King Arthur lyrics in one clump, or even dominating the entire record. It seems a little disjointed to switch in and out of the theme. The music is generally at a good standard, but there are some songs which are easy to pass over, unlike Pilgrimage which was all around beautiful. I also don't see why this could not be a Zed Yago album. It makes little sense to have two bands so close in style and aesthetic and then use the separate names, but I'm assuming there is some valid reason for the change (business, respect to previous members, whatnot). It's not a favorite of mine, even from Jutta, but I was at least satisfied to have another Zed Yago effort (in spirit at least).