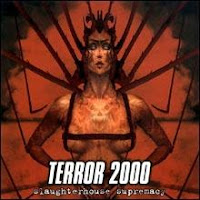 Formed only a few years into the careers of their 'main' bands, Terror 2000 seemed like a dream collaboration around the turn of the century, as it combined the wild antics and intense vocals of Soilwork frontman Bjorn "Speed" Strid with the high speed chase, intricate riffing of Darkane's Klas Ideberg. Filing in the blanks on this debut were guitarist Nick Sword and drummer Henry Ranta, also of Soilwork. The objective here was to create some bone crunching thrash, ranging from a mid-paced thrust to a staggering velocity, and with riffs busy enough to recall bands like Kreator or Artillery in their prime. This is more or less what the band have produced, though it's also highly reminiscent of At the Gates' breakthrough album Slaughter of the Soul, and thus the first two Soilwork records, with the difference being the complexity of Ideberg and Sword's guitars.

From a technical standpoint, this has most of what you'd want out of a modern thrash effort. Terror 2000 did not seem like the sort of band that would brake for anyone, and thus most of the tracks here are performed with neck breaking speed while the endless riffs careen and collide against the peppy back beat. Strid sounds a lot like his work on the earlier Soilwork albums, and the album is void of his cleaner singing, or the over-zealous Phil Anselmo barks and yeah yeah grunts he would later develop towards. Here he is the Tomas Lindberg stepchild he had originally set out to be, but it helps that Slaughterhouse Supremacy does not seem the sort of thrash throwback record which spends all of its presence fooling around. This album is not as self-referential as the following efforts, with the exception of the namesake "Terror 2000", and feels like an honest attempt to light a firecracker under the listener's arse.

So, is it any good? Well, for the 32 minutes it exists, the material is passable if you just want a raucous headbanging and if you can get absorbed in the guitars, because they really make up the core of this bands capabilities. Think Steelbath Suicide or Rusted Angel, and subtract the more atmospheric elements that made those records memorable, then add kerosene. For an album in which considerable effort was invested to the composition of the riffs, most seem to blow buy without provoking much of a lasting impact. The intro to "Firebolt" reminds me a little of Pantera's "Shattered", but the rest of the track is pretty wild, like an 18-wheeler death race pileup on a narrow mountain road. "Elimination Complete" is a pretty good mix of tech thrash and melodeath/metalcore, with a decent atmosphere to the chorus. "Crypt of Decay", "Terror 2000" and "Son of a Gun, Daughter of a Slaughter" are fast and fun, with some head spinning guitar work but I wouldn't award them any staying value.

Slaughterhouse Supremacy is like a 14 year old getting his rocks off, whether in the palm of his hand or some unfortunate who's in just as much of a hurry to grow up as he is. It's exciting and it gets the blood pumping faster to the heart. However, like the cold, dry reality of city concrete or the pavement at the local speedway, it really lacks in a soul, and as a result it's not as impressive as the amount of energy the band obviously placed in its creation.