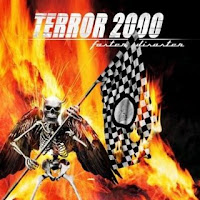 Terror 2000 could have very well been a one shot project, the band's members shaking hands and going their separate ways, back to the careers that enabled the project's existence in the first place, and the integrity of their name held in place. However, it's clear that Speed, Nick, and Klas were enjoying themselves all too much for that scenario, and so, two years later, the second effort, Faster Disaster arrived. Now, I haven't broken out the actual speedometer to make a scientifically accurate comparison, but it seems the title is not a joke, because there is even more vitriol and hypertension packed into this sophomore, not to mention that the riffs are just better in general, and Nick and Klas are in such a focused frenzy here that they somehow concoct a few that really stand out.

Unfortunately, not all is well in terror-land, because the band have seemed to up the dose of silly, self-referential lyrics, as if Terror 2000 were some imaginary force of thrash police that were about to break in your door and make everything alright by savaging your wife and property. Often, a band can pull this off. Some have made entire careers out of it. But in the case of these Swedes, who hail from bands that one might actually consider somewhat intelligent if they don't possess some overarching bias against Swede metal, it just feels a rather rotten joke that no one is in on, and that no one could ever care about. For fuck's sake, 'no one' will be so busy banging his head to these riffs, developing serious neck cramps, that he probably won't care less about the lame lyrics. To be fair, not all of them are all that stupid, though most meaningless and silly cliches of no import.

But, gods, the riffing is crazy here. I'll pick out my personal favorite here, "I'm Speed at Night", which is just a wall of intricate, super charged fretboard frenzy that races by at such an intense speed, you run clean of any conditioned physical response within 30-60 seconds. I can't say I'm a huge fan of Speed's vocals over this, they sound like a Phil Anselmo if he was far more into his alma mater's thrashing potential than whatever drug was 'cool' that week. But they're enough to serve as further mind bludgeoning, as the track races through beautiful riff after riff to a wild solo that I would not kick out of bed for crackers. There are others nearly as packed with good wholesome guitar work, like "Back With Attack" and "Stalkers in the Night", and then there are also a few slower tunes like "Menace of Brutality" which take their time to arrive at their goals of lightning speed. But arrive they do!

Faster Disaster is a well-produced album, with a new drummer in tow, Erik Thyselius (who has also played in Construcdead and Face Down). The guitar tones are even more crisp and revealing than the debut, and really everything about it is a step up from Slaughterhouse Supremacy. The style is the same, but the riffs are just stickier, and it might be worth looking past the lame, unfunny lyrics to attain this, especially if you're a fan of the immortal thrashing guitar volleys of the 80s like Artillery, Tankard, Sodom, Destruction and Kreator.