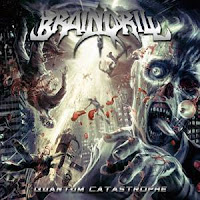 On the surface, California's Brain Drill seem to me as if someone had actually drilled into my own cranium, rifled around in the mushy gray matter, withdrawn all of the nightmare-stuff relating to everything I dislike about most modern death metal, and then gone in to the studio to rub it all out simultaneously. Their debut album Apocalyptic Feasting was a bewildering drive-by of blasting beats, blunt vocals and near constant arpeggio sweeping which felt like Necrophagist and Origin had sired an ugly child together, and I found that it provoked no response or resonance from me, with the possible exception of stifling a yawn.

Is it impressive that a cadre of human beings can perform material so excessively unrelenting without taking a breath once in awhile? With the exception of the vocalist, Steve Rathjen, who gets the easy job here, I would say that it certainly appears to be strenuous on the arms. Dylan Ruskin's performance is a mix of his many sweeps and solos, far too many in each particular track, and the brutal riffing that lies between. Bassist Ivan Munguia (formerly of fellow Californian extremists Odious Mortem) is every bit his match, fluttering all over the frets, while the drummer Ron Casey turns in the expected, robotic skin beating narrative that so many of these modern, tech death albums share in common. As an exercise in the lengths to which a human can perform death tropes in a repeated pattern, with predictable if excessive results, Brain Drill does not disappoint. In fact, we might have found a viable new fuel source here. What exactly do these gentlemen diet on?

But here's the catch: when this band actually takes a breather from the endless surge of trying to bury every other band under the sun with their incessant energies, they actually DO produce some decent music. A few examples I can think of here would be the solo section in "Beyond Bludgeoned", beginning after the 2:00 mark, with some morose backing chords that support a vile, twisting lead guitar, or the penetrating bursts of evil that peak out behind the obfuscating walls of wanking in "Nemesis of Neglect". The nearly endless "Quantum Catastrophe" itself also has a very cool lead segment about 5:00 minutes in, not to mention a great melodic pattern soon after. The problem then, is that you require a lot of patience to get to such moments, because so much of what they emit here is uninteresting, creative ballgaggery, and merely a stress test for the human frame. Muscles, bones and cartilage flexed to their very limits.

I have no inbred aversion to technical death metal done right. I didn't actually hate Quantum Catastrophe, and I can't really fault these guys for trying to take it out as far as possible. This is what some metal musicians feel the inclination to do. This is how they leave their mark. But it is clearly a symptom of a larger issue: the soulless majority of our metal consumer culture, who want their meals served to them hot and fast, without any time taken to savor the nuance of its ingredients. Brain Drill can shred with all the feel of a machine. In fact, on a point for point basis for technical precision, they can play most other bands under the rug. Can it get any more extreme than this without turning it all over to a computer? Why then, when I awake tomorrow morning, or next week, or next month, or next year even, will I feel no compulsion to listen to this record? Why can a group of individuals with such a communal wealth of technical ability not write a death metal record I want to hear?