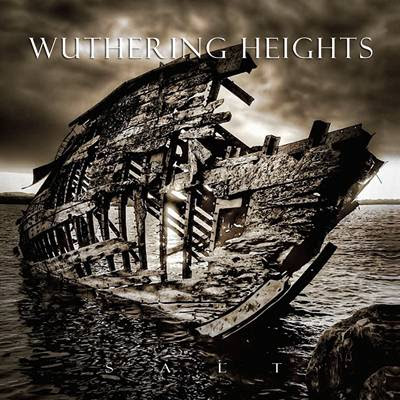 In a year that also saw albums from Angra and BlindGuardian, Wuthering Height's The Shadow Cabinet was my favorite power/prog album. So naturally I had high hopes for their follow-up Salt. It manages to hit on a lot of the things I like about the band while never quite living up to the manic creativity of their last album.

The lyrical premise centers around sailing, but there is also a running theme of desperation, and infertile minds and land, reminiscent of TS Eliot.

Nils Patrik Johansson's theatrical vocals are perfectly suited to the band's sometimes off-beat developments. "The Mad Sailor" slowly builds to speed and as the guitars come in Johansson belts out "Abra-macabra baby here we go!" and it's silly, but he pulls it off in convincing fashion.

Both "The Mad Sailor" and "The Desperate Poet" are highlights of the album, featuring memorable melodies and sing-along choruses. Even with the depressing subject material Wuthering Heights always manage riffs that are upbeat and inspiring. The album dips a bit after that, not because the songs are bad, but rather they are slightly redundant. The Shadow Cabinet managed to be surprising with its compositions, but some of Salt's tracks unfortunately blend together."Water of Life" steps in with a catchy acoustic riff, and folk feel that leads to a lyric with a drinking-song sound. That fun ditty sets up their big sixteen minute epic "Lost at Sea," and so at this point you have to ask yourself whether you're done with bands attempting songs of this length. It's noticeable here because some of the songs on Salt clearly overstay their welcome with an average length of over six minutes.

Fortunately they saved some of their best riffs for "Lost at Sea." The song charges through the first seven minutes without slowing down. I'm not sure if its possible to make a song about the sea without referencing Rime of the Ancient Mariner (the poem and the song), but Wuthering Heights do and do it well. At the seven minute mark the guitars fall away to a sinister bass line, while Johansson's narrator works through his madness and imposed solitude.

The eleven minute mark introduces a slow gallop of an acoustic guitar that builds towards the climax. The real end of the song hits around the fourteen minute mark and kind of summarizes the problem with the album. They simply needs to learn when their songs are over and let it go. Had they tightened up each number it would be a much stronger album over all.

Bottom line: Salt is a worthwhile listen for fans of the genre, new comers should check out their previous album instead.