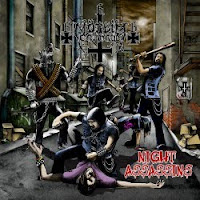 Earlier this morning, local authorities discovered a swollen corpse caught in some anchor ropes down by the marina. The corpse has been identified as Thrash Metal, a 25 year old woman who just last year graduated from Been There University, where she majored in Done That. There is evidence that the victim was both strangled and molested, and authorities suspect a raving gang of lunatics who have recently moved into the area, wearing military surplus bullet casings and dingy denim jackets covered in pins and patches. If you should see these men, please avoid any physical contact, and try to stay indoors, before calling the Taste police.

Alright, perhaps I'm taking the piss out of this record a little too far, but you need look no further than its cover art to understand exactly what you're about to hear. This is violent retro thrash with a filthy street mentality, a flurry of fast and familiar riffs, and a crazy vocal/drummer named Blasphemy (aka Lédeczy Lambert of Ahriman and Fagyhamu, some decent black metal acts) who howls and beats the fuck out of his vocal chords much more than the average retrohammer. The word 'thrash' will be uttered on this album, and the band are clearly out for nothing more than a good time. They've got an umlaut in their name, and the name itself is culled from the first and last words of many other bands. I suppose you don't hear this style often from Hungary, so there is the added novelty of their locality, but really this just sounds like a slightly more violent alternative to the retro thrash and black/thrash of both Swedish and American bands.

As such, it has its work cut out for it among so many other, similar acts, and the strength here will rest in the riffs. The riffs are actually decent fun, taken from the usual suspects like Tankard, Destruction, and perhaps an older, 'retro' band like Nocturnal Breed. If I say the 'r' word too often here, just kick me in the teeth, but I can think of no other way to put it. This has all been done to death, especially in recent years, but if you're in the mood to take a baseball bat and smash up some trash cans in the nearest alley, a track like "Deviant" or "Empty Graves" should suffice. I also thought the "Castle in Pain" was worthwhile, with a nice lead and some bleeding edge, pure old thrash rhythms that did evoke a rhythm in my neck and did not drain my enthusiasm for the 7+ minutes. The rest of the seven songs were fair, if not impressive overtures to the bands' still ripe influences.

Mörbid Carnage seem like they'd be good fun to hang out with, and I'm all for the promotion of riotous acts through street thrash, but this album simply treads no new ground, and doesn't do much of note with the ground we were already standing upon. Crack open a beer, shut off the brain, and have a little fun with Night Assassins, but this is more the one night stand of rough, average intercourse than the serious, loving relationship.