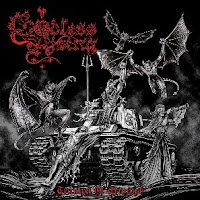 Jeff Gruslin and guitarist Toby Knapp might seem an odd pairing to stick together for a band. The former was the vocalist for Vital Remains during their 'classic' phase of Let Us Prey and Into Cold Darkness, rejoining briefly in 1999. The latter is probably best known for his melodic US power metal band Onward, but has also done some work in black and death metal ala the brief lived band Darken, not to mention his instrumental records which showcase his accomplished playing skills. Well, unusual or not, the two have truly come together here to produce something far and above the call of any expectations one might hold based on the band's previous fare.

As a New Englander, I am always happy to have a couple bands in my extended backyard that perform this genre the way I like it, but I wasn't a huge fan of the first two Godless Rising records. They were solid, competent death metal albums, but really lacked in the departments of pacing and replay value. Well, if Rising Hatred and Battle Lords were mere matchsticks to the infernal depths, Trumpet of Triumph is the full-on field of artillery fire. The addition of Toby Knapp has grafted a hint of sub-technical flash to this record which keeps the majority of its 11 tracks interesting and polished. This is 'riff' death metal and not 'atmospheric' death metal, though the latter is often conjured directly through the former. Above the writhing, almost progressive guitar onslaught, Gruslin offers his choral hymns of sacrilege, a massive, tattooed affront to the sanctity of sheep that inhibit the progress of all mankind!

The album shows a pretty heavy influence from acts like Pestilence and Gorguts, in addition to the expected Vital Remains, Deicide or Morbid Angel. You can really hear it in Knapp's riffs, several of which feel like outtakes could have been used on Testimony of the Ancients. Tracks like "Ungodly Incantations", "Devour the Soul" and "Through the Flames of Rage" are simmering with enough guitar power to please not only the advocate for technical, musical death metal, but possibly beyond that into the melodic death realm, without any sacrifice in brutality. Gruslin is here to make sure of that, using a wide range of growls and snarls and even some morbid spoken word that takes you by surprise when it pops into a track. There are a few occasions where his snarling voice is not quite on par with the growls, which he excels in, but there are equal occasions (as in "Through the Flames of Rage") where he uses the higher range more and it snuggles right into Knapp's constantly engaging axe ministrations.

Trumpet of Triumph is about 45 minutes long, and it really never gets boring. Even when you have plumbed its depths, surprises like "We Are Legion" and "Warlords of Darkness" await you. Lyrically, this album seems like Sun Tzu for the legions of the underworld as they march upon the witless flocks horded about the Pearly Gates, with cannons of hellfire and lashing sermons of blasphemy parting the spectral human tide. The production is reasonable, if not the best I've heard lately. The guitars crunch nicely on the low end, and the vocals could be a little better mixed, but the leads and melodies are beautifully woven through the lattice of dementia.

In all honesty, Godless Rising have arrived at the precipice of originality here, a place where thrash, death, and a little classical shredding influence congregate upon the hinge of damnation to create something you can listen to repeatedly. The riffs and leads are pretty accessible, and yet I still felt like subsequent spins of the albums brought new details to my attention. The gripes are very few here, and minor. The cover art, while decent for some retro black or death metal release, doesn't quite live up to the music on the album. In fact, I could see someone flipping through the CDs at a local shop, seeing this and passing it by based purely on the notion that it's some generic Satan adoring slugfest. That's clearly not the case when you listen to the music, and I'd urge you to give Gruslin and Knapp a chance here. Theirs is a remarkable collaboration, and I hope they will work together again to ensure Godless Rising progresses further into the depths of this hell-well of inspiration.