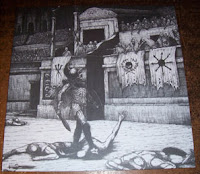 Normally my exposure to Californian death metal consists of either high quality Carcass worship (i.e Exhumed, Impaled) or a slew of consistent and technical fare with its finger on the pulse of today's current edge of brutality (i.e. Severed Savior, Deeds of Flesh, Odious Mortem, Sepsism, The Faceless, the list goes on). It throws me off my game a little to hear two downright old school bands like Sanguis Imperem & Nocturnal Blood from the same place, but hey, it's an enormous state, and there are plenty of killing grounds for everyone.

This is one of the better match ups for a split release I've heard of late, because both acts walk a very similar path, though not to a fault that you'd be unable to distinguish them from one another. Sanguis Imperem has a slightly more warlike, in the face death tendency while Nocturnal Blood is more about invoking sheer horror through the level of atmosphere placed alongside the riffs. I won't lie, the writing is incredibly simplistic, to a level that many bands could assert by simply plugging in and jamming out the first things that come to mind. Neither of these bands is bent on establishing virtuoso credential for itself, they just want to play death metal the way it once reigned, and a listener's enjoyment will rely largely on the extent to which he or she can ignore any lack of nuance or progression. That being said, if you are fond of the morbid old regime of Entombed, Autopsy, Grave, Obituary, Hellhammer, Bolt Thrower and Deicide, then pull up a chair, throw on your scrubs and watch the mortician as he begins to embalm these archaic tones. The place is here, the time is Nuclear Now!, and the Father, the Spirit and the Holy Ghost have each turned their backs on us long ago.

Sanguis Imperem takes the first half of the split, several of whom actually perform live with Nocturnal Blood, making this an even more natural collaboration. They open with a bizarre, brief ritual of fuzzed out clean guitars, background winds and noises titled "Festum Mortis", and then proceed into "Carrier of Plagues", a grinding blaster with basic, primal riffing and a nihilistic level of hostility reminiscent of the early English bands like Bolt Thrower, Benediction, Impaler and the like. "Tyrants of Iron" is more bombastic, with some steady, slogging rhythms over a march-like drum beat, as well as some snarls mixed into its growling. "Red is the Color of the Gods" is the best of the three, reminding me very much of something that might have appeared on War Master or Realm of Chaos, with a great build in momentum after a writhing, snakelike melody that offsets the pummeling chords.

I'm already loosely familiar with Nocturnal Ghoul, Spirit of Darkness and his Nocturnal Blood project, having some exposure to his previous EPs, Nocturnal Crucifxions (2009) and Invocation of Spirits (2010) which, while falling short of mind blowing, were successful stabs at a raunchy, ancient vortex of evil. The material here on the split is no different, and the guy knows how to win you over almost immediately with a creepy intro ("Chime the Bells of Doom") and an immediate lapse into death metal so dark it can NOT have been created in the surface world. At the very least, this was written in a deep, dank cellar somewhere, or some secret catacomb that runs below a sepulcher, where the willing are free to rob the dead from below. This shit is just disgusting sounding, and tracks like "Blasphemy Written in Fornication" and "Abnormalities Prevail" should solidify Nocturnal Blood's place among similar depravities like Funebrarum and newer acts like Cruciamentum, Vasaeleth and Innumerable Forms.

If I were forced to choose a side, well, I think I've made that already clear. Sanguis Imperem shows promise, and riff-wise the bands are close to the same level, but I did find myself losing a little interest in spots where the material felt too dry and had little cryptic octane dowsing it to compensate. Nocturnal Blood simply maintains that grim and horrific craft I have come to expect out of the better nostalgia-fueled death metal acts, and his side of the split is like having your rotten cake (Left Hand Path) and eating it too (Onward to Golgotha). I'm certainly no apostate towards the more modern, technical and experimental movements within the scene, but it's always refreshing to throw on some of this freshly festering, old school sound and realize that there are others out there who know just where it all came from, and where it is very often welcome to return.