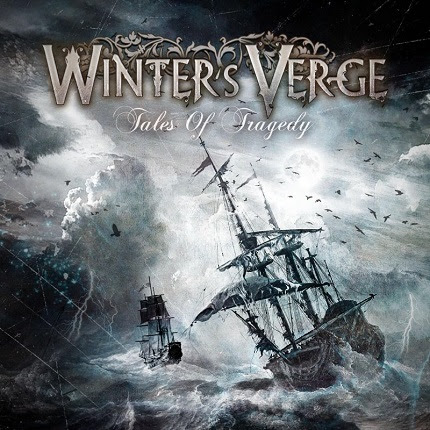 Tales of Tragedy is the third album from Cyprus' Winter's Verge. On their third effort the band has crafted a solid and acceptable power metal sound that suffers from being easily forgettable. The songs are energetic and will appeal to fans of bands like Persuader and others who practice a speedy and heavy sound. Unfortunately I'm not sure they've distinguished themselves from the competition, so it's hard to really get into the album.

Singer George Charalambous is reliable, though he is definitely stretching the limits of his voice. Particularly on "I Swear Revenge," a highlight of the album, Charalambous seems to be hitting on the upper limit of his screams during the catchy chorus.

Guitarist Harry Pari shreds and plays a variety of riffs although nothing that will immediately make you take notice. The intro to "Dark Entries" demonstrates his capabilities, but something still seems lacking. A second guitar might mix things up.

Stefanos Psillides does a good job with the synth orchestration particularly on "Captain's Log." Unfortunately they tend to drop him out during the verses, and it seems like he could add more to differentiate each song.

Other highlights include "Tomorrow's Dawn," a quick thrasher where Charalambous slips a little theatrics into his vocals. Winter's Verge is a solid band that needs to work on their sound. Their songs hit all of the expected notes in a power metal album. If they manage to shake it up on their next effort and work in some uniqueness, I'd be excited to hear it.