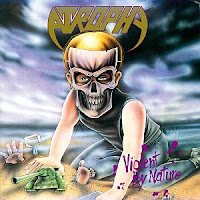 Atrophy's 1988 debut Socialized Hate was a solid, energetic affair strong on both riffs and vitality, but it was unable to force any wider ripples among a public consciousness for the thrash metal genre that was only then teething upon the 'big 4' US thrash bands (Metallica, Slayer, Megadeth and Anthrax) with barely any room left in their attention spans for the exploding scenes out of Germany and the Bay Area, much less the rest of the world. A few other bands would slip through, like Testament, Annihilator, or the Teutonic trio of Kreator, Sodom and Destruction, and garner a reasonable level of success, but so many bright and talented upstarts would be hung out to dry. Atrophy but one of them...

However, the Arizona thrashers were able to cobble together not one, but two impressive LPs chock full of thick, semi-technical riffs, memorable structures and the glazed, almost constipated furor of Brian Zimmerman's vocals (I mean that as a compliment). Violent by Nature is actually a dash more memorable than Socialized Hate. It may lack some of its predecessor's overall focus on speed and intensity, but the songs are extremely well balanced, with bigger sounding bass and memorable chorus vocals. Armed with an iffy (though memorable) Paul Stottler cover image, who you may recognize from his numerous covers for fellow Arizona thrash squad Sacred Reich or his work in tattoos, Violent by Nature arrived just before the thrash wave broke in 1991-92 and was swept back out to sea. Sadly, it was hung up on some oil-stained reef, void of the attention it probably deserved.

The potentially ill-titled "Puppies and Friends" blazes its trail immediately, with some action packed, frenzied that carries through the gang shouts to the extremely cool descending hyper-breakdown around 1:30. The band's popping bass and dense, compact guitar tone (like Exhorder's second album, but better) create a very percussive feel, across which the leads blaze, though they're not highly interesting as far as their own internal composition. "Violent by Nature" opens with busy beat and some further winding, thrash grooves that meter out their complexity through a muted bombast, and Zimmerman enforcing his throat with some variance and emotion, and gang shouts galore into the chorus. "In Their Eyes" is a slower piece, perhaps Atrophy's interpretation of the 'non-ballad', fully loaded with melodic hooks and a powerful, meaningful climax. Do it for the children! "Too Late to Change" features a sweet acoustic intro that blooms into a lead reminiscent of Testament, and a killer thrashing break after 3:30. I also love the bass in this piece.

"Slipped Through the Cracks" is another poignant piece about the failures of the US education system in all the glories of its competitive castigation, with some mosh heavy rhythms akin to Sacred Reich or S.O.D., while "Forgotten But Not Gone" features not only a sweet song title but a series of arching melodic, gladiatorial riffs with a Megadeth-like groove packed into the verse. "Process of Elimination" further sears the band's quality guitarchitecture into your brain, a nigh endless onslaught of sick headbanging riffs that pick up to a frenetic brutality reminiscent of the debut album, only tempered in the more sublime melodies of the vocals in the bridge. "Right to Die" contains one of the best riffs on the entire album (behind the verse), with a very natural flow that makes it impossible to forget, and "Things Change" makes great use of its backing gang shouts, crumbsucking vocals and pummeling bounce rhythms.

As you can see, just about every song here is good, regardless of whether or not we find the very 80s subject matter of the lyrics to be relevant to our lives today (hint: it is, we just may not think so much about these particular topics). For many, this is another undiscovered gem of the 'Golden Decade' for thrash metal, well worth shelling out the coin to acquire. In fact, buy them both. It may be a product of the same well of utter brilliance that produced a Master of Puppets, Rust in Peace, or Reign in Blood, but it's a damn good thrash metal record which holds up 20 years later, as fresh and crunchy as the day it was laid to tape and delivered through a pre-suck Roadrunner Records.

Highlights: Puppies and Friends, In Their Eyes, Forgotten But Not Gone, Right to Die