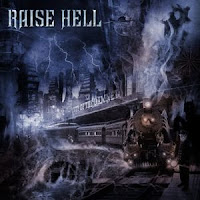 A phantom train zips across a doomed city line, and the fourth album from Raise Hell arrives, some four years after Wicked Is My Game. Some of this delay was likely due to a pair of lineup changes, and the acquisition of a new label after the deal with Nuclear Blast expired. Soon after the band released Wicked is My Game, Jonas Nilsson made the decision to hire a vocalist so he could focus solely on his guitar work. Honestly, you wouldn't notice, since the studio guitars here are hardly more complex, so it must have been a live gig decision. The new vocalist is Jimmy Fjällendahl, and while I don't enjoy his vocals nearly as much as Nilsson, he's at least got the right type of approach, a caustic snarl that fits in well with the spooky horror show thrash that the band have continued here from the past two albums. The other change is Joakim Kulo joining the band to replace Torstein Wickberg, who departed in 2004.

City of the Damned is actually a better album than Wicked is My Game, but it takes a few tracks to get revved up. "Devils Station" does not exactly excite through the thrash riffing, but it gives the listener a chance to adapt to Fjällendahl's snarls. The atmospheric break around 3:30 features a minimal, resonant guitar melody that sounds cool over the writhing rhythm beneath and the marching drums, helping set up the title track "City of the Damned", which is a slower, groove laden thrash hymn with a better, forward momentum, although it too lacks in riffs that would have taken more than 60 seconds to compose, and the bluesy guitar twang does little for me. I enjoyed the percussion used in the intro to "Like Clowns We Crawl", and Fjällendahl puts a nice swagger to his vocals here that almost matches the charisma of Nilsson on prior records. The riffs are in general predictable but fun, though when the band picks up to a "Holy Wars" like faster rhythm and the leads breakout, it's truly a pleasure. "Reaper's Calling" has some mid paced thrash grooves, a Grave Digger-like chorus, and some nice harmony around the lead.

The rest of the album is mixed in quality, but thankfully, nothing dips below average. "Open Your Mind" and "Ghost I Carry" did little for me, but the melodic vocal climax and the haunted house thrash break after 3:00 in the latter was worth hearing. "My Shadow" and "I" both have a solid array of faster riffs, and "To the Gallows" has a few excellent, charging moments where Jimmy's vocals echo out across the rhythm section. The last track "Rising" is probably the most notable on the album, for both the creepy keyboards that manifest the perfect, cheap horror atmosphere, and the slow, thrashing rhythm weaves in and out of a verse passage with expressive vocals, and clean guitars, before another melodic chorus which yet again delves briefly into a power metal feel.

Though are very few head-spinning riffs to be found in this City of the Damned, and the lyrics are somewhat bland (like the last album), but the songs are reasonably well written and you're unlikely to find yourself bored by its contents. I did miss Nilsson's vocals here, yet his replacement is worthy enough to carry the torch, and by this point he'd already been with the band for years. Like Wicked Is My Game, the production is clear and present, and in particular some fine work was done with the vocals to give them some depth, catering to the thrash and thrust with echoes and other effects. Almost completely gone are the crushing, raunchy tones of Not Dead Yet, and all of the band's previous black metal influences, save for the fact the vocalist is rasping. In fact, Holy Target and City of the Damned sound like two entirely different bands. This is far more controlled than other Swedish black/thrash hybrids, and the band's pure rock influence continues to grow through the hooks and bluesy touches that flourish throughout this material. This album might not be one for the books, but I can hear no indicator that Raise Hell are giving it any less than their best effort, and maturing as songwriters, even if this particular batch was not as enticing as what they summoned forth on the first two records.

Highlights: City of the Damned, Like Clowns We Crawl, Rising