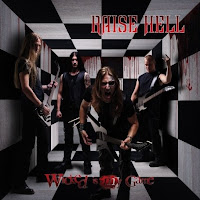 Wicked is My Game is the third album from the Swedish hell raisers, and for the most part, continues in the style the band established with the excellent Not Dead Yet two years prior. Once more, the band decided to visit Studio Fredman (and In Flames vocalist Anders Fridén) for production, but the difference here is that the mix seems a little less crunchy, and a mite more reserved than its predecessor. The band have an even greater love of melody, and they've come to let the songs breathe a little more in the mix, maybe a bit of pure rock and roll energy too, but this is still a decent, venomous thrash metal album led by Jonas Nilsson's black, rasping, charismatic tones and the power of 'the riff'.

If the intro to "Hellborn" sounds familiar, that's probably because it's a metallic rendition of John Carpenter's Halloween, and here it becomes evident that the band have gone here for more of a 'crisp' than a 'crunch' in the guitars. Still, once the tracks hits 1:30 or so, the music morphs into the Raise Hell original, and sounds quite a lot like fellow Swedish black/thrashers Witchery, with the exception of Nilsson's more pronounced vocal style. The riffs are solid but average, however I did enjoy the little melodic snack around 4:00. "Night-Watcher" is more aggressive, with some fairly virulent thrash riffs and sick vocals (in particular where Nilsson continues to repeat the song title in the chorus), and it's a lot closer to the material on Not Dead Yet. Next is "The Haunted House", which really has nothing interesting on offer, before the title tracks brings us back on track with a pretty rocking chorus with its bluesy melody, if nothing remarkable in the sheer riffing department.

The latter portion of the album brings mixed results. "In My Cell" is hardly inspirational, but pulls off another cute melody in the post-chorus/breakdown before a forgettable bridge rhythm. Far more interesting would be "An Other Side", which transforms from a brief psychedelic of clean guitars to weighty, desperate thrashing groove, with a nice roadster level of speed and killer dual melody bridging the two brief leads. "Deathrace" is fun enough, once again evoking the band's classic horror/exploitation film influence into the lyrics. In fact, the whole album has this haunted theme park thrash meets Alice in Wonderland aesthetic to it, as foreshadowed by the cover pic. "Devil May Care" opens with a similar sound to the previous album's "Babes", before a slow churning rhythm with a lot of groove. Honestly, sounds like an outtake from Not Dead Yet. The final track, "The Destiny Deceiver" is nothing particularly memorable, but probably the best song on the later half of the album, with a rolling momentum, a creepy chorus, and a few strikes of the cowbell for good measure.

Wicked is My Game seems like a natural followup to Not Dead Yet, but it does lack all of that albums overbearing power, as well as the novelty of the band's shift from their earlier, melodic black metal element. This is certainly something you would enjoy as a die hard fan of the first two Witchery albums, but I felt it lacked a little of the bone crunching power of many songs like "Dance With the Devil", "Babes" and the like. It's cool that the band is into horror films and stories, but the lyrics here leave much to be desired. Nilsson's performance is perhaps the strong point of this album, but even that takes a back seat to how wild he was on the last album. Sadly, he decided to focus on his guitar playing for the band's 4th effort, so Wicked is My Game is the last we might hear of him as the Raise Hell frontman. I can't say I love this record. I felt my expectations deflate as I listened through it the first time, and through the years I've had very little reason to re-visit it, but it's successful enough to enjoy for a few spins.

Highlights: Night Watcher, An Other Side, The Destiny Deceiver