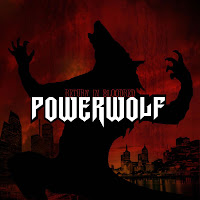 In retrospect, my initial reaction to Powerwolf's unique mixture of cult horror aesthetic and booming heavy metal siren seemed rather foolish, for I've come to greatly appreciate their sound through the past 5 years, in particular that of their sophomore outing Lupus Dei. But my first time listening through Return in Bloodred, I wasn't sure what to think. Did these guys not get the message that a bad gothic getup was hardly the ticket to success at the crossroads of classic heavy and power metal? Fuck, it didn't work out for Crimson Glory, and these German-Transilvanians were nearly as ridiculous looking as Sweden's Lost Horizon.

Of course, as often happens when one makes rash judgments about anything, I was wrong in giving even a cursory thought to the band's image, because their music is really something else. Lively and welcome, the band's arsenal of catchy, gothic power metal creates an immediate distinction from the fleet of Judas Priest, Rhapsody and Helloween clones that were assailing the continent. No, you won't hear a sped-up, X-treme Gamma Ray here (i.e. Dragonforce), or a soulless interpretation of Stratovarius, but an entirely different beast that balances Deep Purple, 80s Sabbath, and Alice Cooper with the cult sounds of NWOBHM bands like Demon or Witchfynde. Interestingly, vocalist Attila Dorn was not in all out firing mode here on the debut, Return in Bloodred. Whereas Lupus Dei offered a glance at what Ozzy might be doing in the 21st century if not for sucking and being slowly put out to pasture, Dorn's performance here is far more restrained, with an emphasis on his middle range. He still screams, but not quite at the level of 'mad gypsy siren' found on the sophomore.

In fact, I feel so spoiled by Lupus Dei (which is a vast improvement over this album) that much of Return in Bloodred feels subdued, which chorus parts not nearly as striking as those the band will later concoct. But there is some solid heavy metal here, complete with organs and big, simple rock rhythms set against an old European landscape of cobwebbed castles, howling wolves and a blood red moon. Tracks like "The Evil Made Me Do It" and "Lucifer in Starlight" crawl along with a massive, doomed influence, Dorn giving some his most powerful performances on the album. You get the feeling this material could be played as a horror rock opera, much like a King Diamond or Alice Cooper, and the band has the uncanny to craft an almost 'Gothic Wild West' motif when they stray away from the verse and chorus.

"Montecore" is one of the more powerful tracks on the album, beginning with Dorn's soothing heights along the sample of a babe, before a huge, Arabesque rhythm cedes to the steady triplets of the verse. "Son of the Morning Star" is a pompous, elevating martial power ballad in which Dorn offers some endearing, if completely cornball narrative (and a brief duet with a female singer in the opening). Not all the songs are perfect. For example, "We Came to Take Your Souls" is a raging, basal rocker with utterly cheesy lyrics about fighting for metal and the like. Not that memorable. "Black Mass Hysteria" is a slower, predictable piece with some nice little leads cutting through the vocals, but not much by way of quality riffs. On the other hand, "Kiss of the Cobra King" is amazing, with excellent vocals and a truly singalong chorus (best representative of the Lupus Dei material). "Mr. Sinister" is also a fairly kick ass opener, with cool, controlled licks and a chorus highly reminiscent of Ozzy at the prime of his solo career (at least in popularity, the early 90s efforts).

In all, this is an enjoyable effort, with a few tracks lagging behind the rest of the band's career. The mix is wholesome, and you truly get a shiver as if you're listening to the entire album in a cathedral with high vaulted ceilings, while the full moon and all its terrors lurk just outside the sanctity of the pulpit and crucifix. Is it cheesy? Sure it is, but the good kind, and I'm sure the band had the clear intention of writing in a style you laugh at while banging your heads and fists to. Perhaps the biggest problem with Return in Bloodred is that it the band would go on to destroy it with the follow-up. But a few of the songs here walk toe to toe (or paw to paw) with anything on Lupus Dei, and I'd say this was just as good as their 3rd album Bible of the Beast.