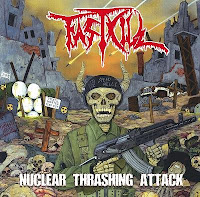 You might have missed the debut of this Japanese band, Infernal Thrashing Holocaust in 2004, because it sped past you so quickly that it resembled nothing more than a blur. Or perhaps you were one of the lucky (or unlucky) souls who blinked in that moment, and thus were fashionably unaware of Fastkill's existence. Depending upon the stance you take with retro speed/thrash metal, this could be good or bad, because Fastkill stands at an anomalous crossroads which both celebrates some of the lame aspects of all the bands these days paying praise to a life that they very well might not have lived in the 80s, and then takes them tearing off to a level of extremity that both punishes the listener and has him keeling over in his chair, wrenching in laughter.

Take the early Bay Area sounds of thrash metal like Exodus, Sadus, or Dark Angel, dial the speed up a notch, and add an incendiary vocalist that screams and barks across each track like a flock of seagulls beating their wings in the grip of a PCP typhoon. Create lyrics and song titles, or rather paraphrase the lyrics and song titles of so many to come before, dub it a Nuclear Thrashing Attack and then scare every fucking proposed poseur out of his/her high tops and carefully tailored denim jackets from the local Salvation Army shop. Now, while this all sounds amusing, the band doesn't actually approach such a situation with the same broken Engrish that ironically makes a band like Metalucifer or Abigail so god damned endearing. They are actually somewhat on top of the English delivery, and focused on their payload of aggression. Still, while the whole 'nuclear radioactive thrash maniac attack' aesthetic might have me rolling my eyes back in my skull, through time, to the years in which Nuclear Assault and Sodom bit off the same branch with a less ironic bark, I strangely found myself absorbed in Fastkill's overwhelming onslaught against the senses...at least for a short period of time.

Yes, you TOO can channel your attention deficit disorder into an appreciation for lightning guitar rhythms and vocal spasms that in any other case would signify an IMMEDIATE necessity for medical attention. Picture poor Kerry King in a highway patrol outfit, clocking this monstrosity as it whizzed past him on the interstate, his goatee agape and tribal tats melting in the midday sun, sliding down his skin to form pools of ink on the asphalt. Nuclear Thrashing Attack provides exactly that sort of meltdown, as it leaves the speedway in dust with tracks like "Annihilation Betrayer", "Bloodbath" and "Die in Pain". Still, the band can write some riffs, and hidden within the sheer momentum of each of the above, you will find some more mature center that betrays all its frivolous surroundings. Granted, when the band takes a breather, their riffing actually becomes a little easier for the human mind to ingest and support: exhibit A being the virile, boxy thrashing of "Hate, Destruction, Kill" which would have felt right at home on Razor's 1988 killing spree Violent Restitution, or exhibit B, "Hunted Victim", a taut and memorable thrasher which very closely resembles the work of the Bay Area's own Vio-Lence (on both Eternal Nightmare and Oppressing the Masses albums).

The short of it: Fastkill kick an appreciable amount of ass at what they do, even though they fail where all the 80s legends excelled, at crafting immersion and memorable experiences that will last the listener nigh on forever or until each brain cell dulls with age. However, if you're looking for something absurdly frenetic, and your Municipal Waste or Gama Bomb records won't do the trick, then it's time to up the ante a little and witness the paralyzing intensity of Japan's most manic 80s wannabe road team. I just wouldn't wanna be this band once all those speeding tickets get calculated and they owe more yen than their economy produces in a a decade.

Highlights: a beep, beep and a meep, meep.