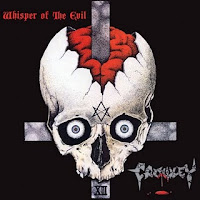 I have an admittedly deep seated fascination with a great deal of Japanese culture and entertainment. Though my fluency with the language is limited to a few intensive courses I took as a minor at university (and now growing dimmer as cobwebs have begun their interior design of my brain), I still find myself inexorably drawn to their music. Whether that's the harsh violence of Merzbow, the sugary, delightful reconstruction of 80s new wave and dance of the J-pop scene, sexually ambivalent visual kei bands, the scores of both classic and modern videogames by Japanese composers, or the staggering array of metal the nation has produced, it makes very little difference to me. There is generally something so disarming and memorable about what they contribute to record. Of course, as with anything, there are exceptions to be found...

Crowley was not a very well known band, coming up in an 80s scene that produced such prolific and talented beasts as Loudness, Anthem, Tilt, Blizard, Earthshaker, and EZO among others. Compared to most of these, they produced very little in their career: a split release, an EP, a demo and this sole full-length offering. And even Whisper of the Evil itself is rather quaint, just six songs at under 30 minutes of music. The style is pretty stock heavy metal for its day, drawing on the NWOBHM influence of bands like Judas Priest and Def Leppard and applying the characteristic, heavily accented Japanese frontman. Crowley likely fancied themselves a somewhat darker entrant into this vast field, with their necromantic cover art, leather and spikes, but what crops up on this album is actually a pretty subdued approximation of the first few Loudness records. In particular, I was reminded of Devil Soldier or Anthem's self-titled 1985 debut.

Unfortunately, Crowley, despite having such a cool band name, were simply void of much of the attitude and resonant writing that made those other acts such a success. This is very simplistic street metal with incredibly minimal, derivative riffs that do little else than service the linear transmission of the song structure. Though I don't mind Takashi Iwai's vocals, they lack the presence and bite of an Eito Sakamoto or Minoru Niihara. The writing is somewhat weak, with only a few dominant riffs, and even these were not up to date with the times. It's surprising, because the opener "Stalker" has such an intense recklessness to it that mirrors the prototype speed and power of other countries of its day. But though it's perhaps the best single track on this offering, very much akin to older Anthem, it's just not enough to save the other, dreary contents.

Iwai uses his vocals to good effect in "Bad Stone", creating a tranquil, dark and bluesy atmosphere for the wee hours of the city night, but the riffs are simply not there. "Night Angel" has some promise, due to the sleek but subtle flow of its main riff (similar to old Savatage), but once again, the vocals build to a climax and the guitars are merely average. "Pretender" also reminds me of a mix of Judas Priest and Savatage, with a half-decent, sporadic lead, and a little bridge before 2:00 where Iwai adds a little torment to his vocals. Once more, not enough force in the guitars. "Woman in a Black Cape" is a power ballad, but at over 8 minutes it does little but lull the listener to sleep. "Floating Man" is the closest the band gets to speed metal, with a steady momentum, and some roiling riffs, but it's another example of how the singer showed up with his A-game (listen to him at 1:30, that shit is craaaazy) and the other musicians seemed to phone in their writing.

Yet, for all its strange imbalance of subdued, hollow rhythm and a passionate, over the top front man, Whisper of the Evil is hardly a 'bad' album. It just wasn't enough to stick its spiked, leather collared neck up above the stirs of the metal beast, rumbling deeply in the belly of Japan. Were I to compile a mix of obscure bands of this era and nation, it's possible I might throw a "Stalker" or "Night Angel" in out of some sense of completion, but this is a band lacking the chops to compete with even mid-level acts like a Tilt or Blizard. It's like showing up for a katana fight with a butter knife.