Reactor - Rather Dead Than Dishonoured (1991) 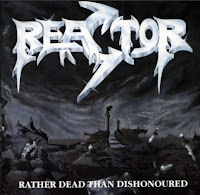 German power/speed metal is a niche that really peaked in 80s with bands like Rage, Scanner, Blind Guardian and Mania at the fore, and then fizzling out as even these bands disintegrated or changed their styles through the following decade to explore broader horizons. Sadly, not a lot of bands were around to try and pick up the slack, as most were turned towards the anthemic power metal of Helloween or an evolution in the roots power of Judas Priest and Accept. Reactor was an exception, arriving in 1991 with a sound much like earlier Rage or Scanner, with a wild infusion of energy and busy, inspiring riffs.

Rather Dead Than Dishonoured is the first of five albums the band would produce during their overlooked career (they split ways in 2006), and one of the best. The band has gone through a few vocalists in their time, including S.L. Coe (Scanner, Angel Dust) on the great 1995 album Farewell to Reality, but here they were fronted by Jerry Bryant, who had a style that resembled a more subdued Peavey Wagner, S.L. Coe or Mania's Chris Klauke: nasal and melodic, but rarely shrieking to the point that your ears feel they'll explode. The guitar work here is generally uplifting and raw, while the drums thunder in the mix and the bass hovers at just the right level. The album's honestly got one those great 80s-styled mixes where the vocals stand far out front but manage not to smother the music.

And for the most part, it rules, with a lot of great speed material like the band's namesake "Reactor", a nuclear meltdown anthem which has a great bass and prickly little melodic rhythm that rises and falls through the verse. The opening guitar in "Help Me Through the Night" reminds me a hell of a lot of Riot's "Thundersteel", but not the rest of the song, and it's a joy to listen through. "Fight for Rock" feels more like an AC/DC hymn than the rest of the album, and the lyrics are a little goofy...referencing 'Bon Jovi' among other things. I'm sure the intention was to create a classic rocker like "Breaking the Law" or "Thunderstruck", and I don't think that was going to be the case. Fortunately the rest of the album focuses on the band's strong points, with more quality speedsters like "Set us Free", "Listen to Me", and "Speed I Need", some of which even evoke comparisons to Running Wild through the riffing. There is one power ballad here called "Look for Mercy", but it's not all bad, with some classy if simple dual melody in the lead.

Rather Dead Than Dishonoured is a solid debut, especially if you are seeking out this sound that I personally find rather rare (at least done properly). In fact, you cannot go wrong with any of the band's first three albums, though some of their later work borders on cringe induction. This material is nowhere near as unhinged and beautiful as Scanner's Hypertrace or Terminal Earth, or Rage's first 4-5 albums, but it will do in a pinch, though the vocals and songwriting here are not exactly perfection.

Highlights: Reactor, Set Us Free, Listen to Me