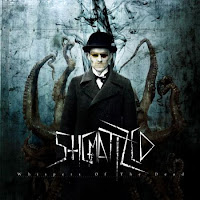 The sophomore album from Stigmatized, Becoming Unique was a clear improvement over the band's debut. It was, in fact, distinct enough to place the young outfit among the foremost ranks of the German death metal blitzkrieg of the past few years, though this is a band who incorporate more thrash than usual for the genre. Taking into account the band's forward velocity between the two prior works, I was half expecting Whispers of the Dead to blow me out of my seat and cement the band as the German force to be reckoned with, a 'third time's the charm' situation.

Unfortunately, the album is not quite that good. The riffing is strong, well on par with Becoming Unique, with a few songs vastly more interesting than others. What occasionally drags the album down for me are the vocals. I really enjoy Michael Lay's more old school, Tardy/Schuldiner-like vocals as I did with the last album, but the band also incorporates a more generic death grunt and an angst-ridden thrash scream that are woven through this central, dominant style. The grunts were also factor on the previous album, and certainly neither of these other styles are poorly delivered, but given the context in which they are all used in conjunction, it often creates the unwelcome effect of many modern metalcore or melodeath bands that use the multiple vocal styles to a fault. Do not misread me: Lay is far better than the vocalist of any metalcore band, but I often felt like the songs would have been superior if slathered solely in his more raunchy growls, because they are so much more effective and cruel sounding over the music.

But back to the riffs: these are the stars of Whispers of the Dead, building upon the strong foundation of the previous album with even more acrobatic aplomb. The band cycles up a whole range of influences from technical German thrash ala modern Kreator and Destruction to progressive death metal from the minds of Death, Pestilence, and the like. Clearly this is not a bad to rush things, they wait until they've got an arsenal of head jerking rhythms and then combine them into cohesive and often memorable songs. A good recent comparison would be Centaurus-A, who are faster and slightly more technical, but share a similar fondness for strong riff construction amidst a horde of more brutal German bands. Or the American band Revocation. The guitar tones are very good here, Marmann and Strzalka are crisp and punchy so that every thrashing groove gets the head moving, even the more forgettable rhythms. The rhythm section of Thorsten Schneiders (bass) and Christian Krämer (drums) holds the mix together like hardening concrete mix.

Of the 8 tracks and 40+ minutes, more than half stand out as enjoyable fusions of modern death and thrash that excel through both their battering verses and solo breaks. "Disturbance of Equilibrium" often channels Pestilence, but the lead sequence is refreshing and warm. "Whispers of the Dead" showcases the band's increased abilities to pump out wilder, frenzied riffing should they so desire, and "The Fall" has a killer speed/thrash hook woven in at around 1:40 in the track. "Impulse" is written with some weight the hooks, a barbaric meaty verse that hammers beneath some of Lay's better vocals on the entire album. I also enjoyed the riffing of "Carved in Bone" with its later Death-like flows. As for the rest, they're not far behind, with impressive leads and energy, just not the same precise riff quality that stood out to me through the aforementioned tracks.

Whispers of the Dead was not overall as moving to me as Becoming Unique, or Centaurus-A's Side Effect Exposed, but clearly this is as polished and professional as they're coming up on the German side, and a band deserving of more recognition than they've had so far. A set list combined from this and the previous album would be pretty devastating in the live setting, and the band has a leg up on other outbreak acts like Hackneyed. If you like your death and thrash tight, modern, and with a mixture of death vocals, Whispers of the Dead may very well appeal to you.

Highlights: Disturbance of Equilibrium, The Fall, Impulse, Carved in Bone