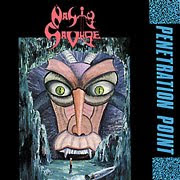 Nasty Savage's third full-length effort Penetration Point poses somewhat of a quandary in the band's catalog. Musically, it's the natural evolution of the previous releases Indulgence and Abstract Reality, a slab of semi-tech thrash metal which, while not ahead of many of the band's European or US peers, was still quite fairly standout for 1989 among a sea of weaker US thrash acts that sounded like bad Anthrax or S.O.D. clones. However, some of the lyrics and song titles seemed like the band had brought back a little of the humor of their waking years, albeit cast in a more urban, late 80s schtick rather than a reversion back to the metal knights and pleasure dungeons of the debut. But don't be fooled, because there's generally a method to the madness.

The album opener is a good example of what I mean. "Welcome Wagon" opens and closes in a very brief vocal sample which seems like a bad joke, but the riffs are purely wild thrash metal in the spirit of the band's previous album Indulgence. The lyrics, while presenting a pastiche of strange pop references and cliches, and delivered in a number of schizophrenic vocal passages which seem like Nasty Ronnie is rekindling the joker inside him, are actually pretty serious. "Irrational" commences with a pretty yet clinical sequence of clean guitars, with new bassist Richard Bateman (the 4th in four releases) making his presence felt, before the bouncing thrash rhythms that feel like a tour through the local asylum. "Ritual Submission" becomes even more clinical, with a nice tech rhythm somewhere between the first Pestilence album and Deathrow's later 80s transition, flowing into some solid speed/thrash with a tight solo segment. It is "Powerslam", however, which serves as one of the album's more memorable tracks, with its sense for mid-paced momentum that should have seen it up among the 'Toxic Waltzes' that were all the rage among the average thrash fan. And what's more, the song is actually a tribute to professional wrestling...

I don't know whether to run screaming or admire the band for this, but hell, if Mickey Rourke can validate the entire profession with a killer film in 2008, why not Nasty Savage with a great tech thrash tune almost 20 years before? Structurally, it's one of my favorites of their career. And at this point, the album really picks up steam which will last it until the very end, beginning with the frenzied "Sin Eater", with its lunacy inducing verse smothered in almost free-form, barking poetry that disperses for the excursions into the underside of sanity that are the raging, busy guitars. "Penetration Point" spirals us directly back into the madhouse with a slew of psychopath riffing, and this is another of the album's highlights (and the band's career highlights), as it shows the advanced level this band were at compared to numerous American acts lagging far behind.

"Puzzled" rambles forth at a similar pace to "Powerslam", but injects a wonderful, smarmy groove in around :20 that precedes Ronnie's suburban splatter. This is followed by "Horizertical", a rather excessive instrumental track clocking around 5:30 minutes of the band's more adventurous rhythmic whims. It's certainly not bad, but for the most part the riffs are of the variety that might have been served with some of Ronnie's vocals, though they do flare up into a more anthemic sequence reminiscent of some instrumental guitar rock & metal of this time. "Family Circus" ends the album on a high note, with pumping thrash and scurrilous speed metal infusions, and lyrics that parallel both the long-term popular comic strip and a more sinister, suburban implication of disenchantment.

As silly as some of the vocals may seem in their delivery, or in the lyrical component, they're fairly meaningful, some even relevant today. Combined with the best riffing of the band's more inspired thrash phase, Penetration Point remains my favorite Nasty Savage album, edging out Indulgence and the s/t, and honestly the last one worth hearing. The band's later reunion album Psycho Psycho isn't bad, and in fact the darker production gives it a more brutal edge than any of the band's 80s work, but there is simply some magic missing there that can likely be attributed to the passage of time, and the riffs don't really compare in my opinion. It's the 1985-89 period of this band that best represents their contribution to the US power/thrash dynasty, and Penetration Point is the jewel which sparkles brightest atop their crown.