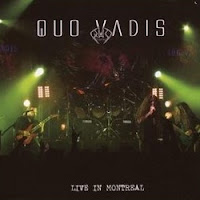 Regardless of my mediocre response to much of this band's studio work, I think it's painfully obvious that Quo Vadis are a band who take their time with each release until the product is flush with both their standards and expectations. This is surprisingly uncommon in the metal genre, where 'hot' bands are won to pump out albums with haste and as much consistency as they can muster, to hopefully ride out some sudden wave of success. There is no better example of this than their 2007 double-album Live in Montreal, which offers the fan nearly 90 minutes of professionally recorded music from all three of their studio albums (ignoring no period of their growth).

This was quite the production. The performance is from 2005 at The Medley, and the band pulled out all the stops to make it as memorable and thorough as possible. Not only do they employ several guest musicians to round out their set, including Oscar Souto of Anonymus, Alex Auburn of Cryptopsy, and Dominique Lapointe of Aetheretic and Augury performing the whole set on bass. They also use a 20+ person choir on a few of the tracks. In addition, when perusing the photos in the booklet they used some interesting visual performance art to complement the musical aspect, with women posing in statuesque positions, etc. Perhaps it might come off a little tacky, but the band obviously wanted more for the audience than just a plug in and play session, and judging by the almost studio quality of the live mix, they wanted the 'product' of Live in Montreal itself to stand the test of time for any involved in a later listening.

As mentioned, the band perform a large amount of their material here. Keep in mind, they've got only 3 albums...so a 90 minute set will comprise a large amount of their studio output. As this was 2005, and Defiant Imagination was the current 'hotness', it is here in its entirety: "Silence Calls the Storm", "In Contempt", "Break the Cycle", "Tunnel Effect", "To the Bitter End", "Fate's Descent", and "Dead Man's Diary". Even the interludes "In Articulo Mortis" and "Ego Intuo Et Servo Te" are here, complete with choir to open the 2nd disc. The Day Into Night track list includes "Absolution", "On the Shores of Ithaka", "Mute Requiem", and the band dips farther back into Forever... with "Carpae Deum", "Legions of the Betrayed", "Inner Capsule" and "Pantheon of Tears". They also perform "Vital Signs", which was on their original demo and later re-recorded for the Passage in Time compilation. I'd imagine it's pretty much the 'dream set' for a Quo Vadis fan.

The songs sound just as crystal clear as their studio counterparts, and while I'm still not a fan of Stéphane Paré's vocals, he's solid over all the material, bantering to the crowd in his native French-Canadian and keeping them psyched for each foray into the band's history. Dominique Lapointe is all over the place, showing that he's no mere 'fill in' for a Steve DiGiorgio or Remy Beauchamp, but every bit, if not more capable in technical ability. Yanic Bercier is ever the devoted hammer, and Bart's guitars are perhaps the most impressive, tightly strung alongside William Seghers (of Neuraxis), who is also joining the band for this monumental live. It's not hard to choose favorites from the set, as they perfectly mirror the favorites I had from the studio albums: "On the Shores of Ithaka", "Vital Signs", "In Articulo Mortis", and "Break the Cycle".

I'm not a Quo Vadis fan, and thus not the target market for this release, but it's pretty much the 'love letter' you'd want from a band to its audience, and as far as live offerings, it is probably well worth the music if you enjoy their albums Defiant Imagination and Day Into Night. Of course, the sound is so polished that you almost feel as if you are listening to one of the studio works, so you may feel a little bit of overlap. Still, the band pulls off the material remarkably well live, with fewer glitches than most bands I've seen through the decades (and that is a considerable number). The band excels in this setting, and to be honest, from the sidelines, I found this more enjoyable than any of their full-length albums.