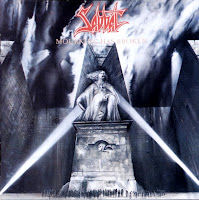 England's Sabbat were easily one of the most intelligent, ferocious and interesting bands to come out of that country's speed/thrash metal scene, and I regard both History of a Time to Come and Dreamweaver (Reflections of Our Yesterdays) as essential classics for any listener who demands a high level of artistry and songcraft within the confines of the genre. I had been following the band since their flexi-record that came tucked in a White Dwarf gaming magazine, and thoroughly thrilled with each new chapter they were embarking upon...

Until 1991 arrived, and Mourning Has Broken showed up in my shopping bag. This has got to be one of the most stunning and perplexing letdowns I have ever experienced among my favorite metal bands. Sure, bands like Megadeth and Metallica have slacked off and produced albums that far under-perform even this, but at the very least...you could see those failures coming from far away. This was a shock. I always wanted to believe that, despite all the personality and energy of his unique vocals, Sabbat's Martin Walkyier was not the sole force of nature among Sabbat's ranks. Surely, the first two albums were BLOATED with amazing riffs and musicianship. But, as this sad, third effort proves, without Walkyier, the band simply could not survive. How does the band suddenly decide that this Ritchie Desmond, while not having a necessarily awful voice of his own accord, is a suitable replacement for Martin's serpentine hiss and hellhound punditry?

Desmond's vocals are honestly pretty strange for the band. For most of the verses, he has a rather mid-range, angry tone, but he's just as often attempting a higher pitch that reminds me of Fates Warning's vocalist Ray Alder mixed with a little of Helstar's James Rivera. Just as soothing, but not as high, and usually appearing during the various segues of clean guitars that feel just as out of place on a Sabbat record. In fact, Mourning Has Broken seems a lot like Sabbat are trying to write a moody progressive, power/thrash metal effort that only resembles the predecessors through some of Sneap's boxy, dark distortion. And while it would be all too easy to place the blame squarely on the shoulders of the unfortunate choice in replacement vocalist, it's actually the music itself which drags this record through the mud.

The riffing is almost entirely boring...even when it most resembles the band's previous material like in "Dumbstruck" or in the thundering "Dreamscape". I recognize that there are in fact fast and hard guitar rhythms, with perky little melodies often cycling through to add another dimension, but with the exception of the rarest cases (i.e. the doom sequence after 5:30 in "Dreamscape" or the creepy intro to "Without a Trace"), there is just nobody home. No fire here. The band's decision to shift towards lyrics with a focus outside their occult excavations and sacrilegious butchery also doesn't help matters. This may be a more 'topical' Sabbat album, with a more futurist bent, but it's just not what the doctor ordered.

Clearly Mourning Has Broken was a mistake, and the band would not survive much longer after its release, since there would be no real reason to pretend that the band's stock had just plummeted off the bottom of the charts, and their creative license was in need of revocation. The album does not completely suck through its 51 minutes of playtime, but then it never qualifies as 'good' either. It wouldn't even be good (or average) for another band under another name. The milk hath been spilled. Walkyier would go on to front the great Skyclad, and the band that had perhaps the greatest potential of any English thrash/speed band would undergo a long slumber, to resurface only when they would reunite with Walkyier for some live performances. But this is one stain that will sadly, forever remain as an example of a royally bad decision.

Highlights: they probably won't be playing much of this at the festival reunion gigs.