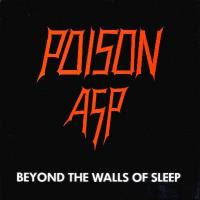 The cover of this obscure German thrash band's EP might have all the staying power of a Skor toffee bar wrapper, but I assure you its contents will stick to your tonsils far longer than any chocolate or condensed sugar. And if you live and breathe by the presence of German thrash and speed as I do, then you'll find it twice as sweet. Poison Asp were a band formed in 1984 which fell pretty far below the radar during the Teutonic thrash explosion of the 80s fronted by Kreator, Sodom and Destruction, but it's not for a lack of trying. Aside from a few compilation tracks on German Metal Fighters II and a demo in 1987, this Beyond the Walls of Sleep was their sole release of note, and while it offers up only around 20 minutes of material, its enough to convince me that this would have been an act capable of far more, given the attention.

The sound here is not novel, in fact the band sounds like a mixture of Destruction, Tankard, Vendetta and possibly Exumer, due to the thickly accented vocalist who sounds like the love child of Schmier, Daxx and Micky. The mix is rather raw, as the band could hardly afford much more, but you can hear all the instruments well enough. The pounding bass, the hiss and crash of the drum kit, and those impenetrably excellent German 'trash guitar tones that were prevalent on some of Tankard's amazing early works like The Morning After. In fact, if you were to stretch out and sun-dry some of Tankard's mile a minute drunken speed metal from that particular offering, the result would be within the same ballpark as Poison Asp. It's rugged and muddily atmospheric, which is coincidentally the EXACT sound I am listening for when I scour the forgotten annals of back-country Euro'thrash.

This is not an amazingly riffy band, but they tend to play from a mid to faster pace, screaming along with such wild abandon that I simply never felt the desire to stop and smell the roses. The guitar work is certainly satisfactory, with the spastic, wild leads that accompanied all of the better acts on the 'messy' side of thrash metal. We're not talking Metallica or Megadeth here, but Slayer's early work, or Exciter. My favorite of the five tracks on the EP is probably the last, "Traitor", which races buy like a dragster on fire, with gang shouts and echoes to the lead vocalist and ripping guitar rhythms. The rest seem slightly more subtle, like the doomed riff that opens "I Am the Grass", a labyrinth of melodic, dire thrashing riff-work that slowly gathers fuel for a violent outbreak well within its borders. "Euthanasia" is suitably spasmodic and turbulent, like a male-fronted equivalent to early Holy Moses. The intro to the EP is also pretty cool, an organ/string piece that transforms into the two-fisted rampage of "Hellfire at the Airbase".

The appeal of Poison Asp if of course limited to fans of the bands I've already listed in this review, or any raw European speed/thrash metal of the Golden Decade. Hearing this album after The Morning After, Brain Damage, Mad Butcher or Eternal Devastation does somewhat dampen the effect, but if, like myself, you're ever searching for more bands to fill this void of sound (as its surviving, original practitioners have all moved on to mutated pastures), then this band makes for an interesting footnote. Sadly, it's the last we'd hear from them, with the exception of guitarist/vocalist Tosse Basler (how do they get such great names?) who would serve some time in other obscure German acts Evolution and Scapegoat.