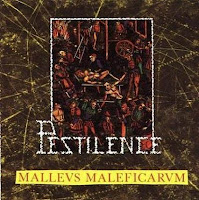 I often liken the world of metal music to the Greek pantheon. In it, there are gods, titans, heroes, priests and worshipers. Worshipers do their best to imitate the various gods, patching together their many aspects into something resembling metal music, but rarely worthy of any but the most dim recognition. This is how we got Trivium, for example. Heroes are those bands which rise to the challenge of the gods, upping the ante with faster speeds, technical arrangements, and modern production values that their deities simply never had at their disposal. Priests act as ciphers, directly aping the words and music of their exalted, keeping it alive throughout the decades and causing endless rebirth cycles of their genres, elements, and so forth through the crowds of worshipers. The gods would be the most famous, successful or even notorious bands. The big names: Iron Maiden, Black Sabbath, Metallica, Slayer, Judas Priest, and so forth. Bands so famous that they can launch and sell out world tours, support their great grandchildren through college with ease, and will survive on VH1 'best of' specials until the end of time. But then there are the titans...mighty forces of old who were 'defeated' or cast down by the gods, despite their infinite prowess and crafting of the very foundations of the form.

Within metal music, this translates to those bands who wrote classic, excellent albums that for whatever reason went over the heads or out of reach of the starved masses in the 70s and 80s. There are a great number of these titans, and though their power source may seem long since diminished, some have seen a rebirth in the years of late, through the concentrated worship of an underground of devout cultists that have simply never given them up. For myself, Pestilence would be one such entity, both my favorite Dutch metal artist since the dawn of the power chord, and the band responsible for two of my hands-down, absolute favorite metal albums period, in death, death/thrash or any other sub-genre. But Pestilence are also a band of transitions. No two albums really sound the same, unless you count their latest Resurrection Macabre which seems to be a time capsule back to the pristine dementia of their first two full-length efforts.

By 1988, Pestilence were a band entering a transitional phase that bridged the thrashing roots of their demo days with the surge in extremity many artists were twisting into what we have now long lavished as the death metal genre. Here on their debut Malleus Maleficarum, you can hear both the sire and the child; the former through the crisp, punchy precision and frenzied mosh pit energy that explode at nearly any second on the album; the latter through the hoarse, festering vocals, the cold and clinical lyrics and production, and the muted speed sections which are stupendously good. Martin Van Drunen, at his career best on both the Pestilence records he was involved with, was in my opinion the most distinct and impressive frontman in death metal. Others have been impressive, no doubt: John Tardy, Craig Pillard, Chris Reifert, Jeff Becera, or even Chuck Schuldiner before he decided he was going to become a pseudo-intellectual cosmonaut. But for myself, it was Van Drunen who brought this all together, with a bruising, tortured weight to his vocals that is rarely matched about 20 years and 20,000 death metal bands later. His vocals were a little fainter here than Consuming Impulse, sounding much like a chain-smoking malpractice surgeon serial killer who just escaped hell and wound up at the local emergency ward.

But he's not the only engine that keeps this titan lurching forward. Marco Foddis is a hammer-adept who operates at a high level of precision running either high or low speeds, with a clean polish that seemed rather uncanny compared to many of death metal's other prototype drum mixes. Patrick Mameli, the band's core and general, has written a non-stop, 38 minute barrage of surgical riffing which stands among the best in all of death and thrash metal, with an obvious proficiency above and beyond the average axe-slinger of his day. He performs both bass and guitar here on the album, and while the former is a little subdued in the mix, the rhythm guitars are enforced by Randy Meinhard (on his only Pestilence album, before Patrick Uterwijk would step in) and barely give you the time to notice. Armed with a proper Kalle Trapp knob twiddling (he has also mixed and produced work by Destruction and Blind Guardian, among others), Malleus Maleficarum has a pinpoint, eerie but honest tone to it, which seems strangely haunting even by today's far more advanced parameters.

But really, it's all about the vocals and the riffs. While the album is not necessarily as brutal as its brilliant, crushing successor, it creates a faster paced, technical environment in which the mad doctor flourishes his scalpels and begins a series of careful, taut incisions that maximize the pain and bleeding of the unfortunate patient. Tracks like "Extreme Unction", "Systematic Instruction", "Cycle of Existence" and "Bacterial Surgery" move with some the most violent, breakneck speed thrashing since Slayer's Reign in Blood a few years prior, all the while vomiting forth a series of unforgettable riffs that are both menacing and rather unique for their day. There is far more than just speed to this band, the compositions themselves are impressive, and the album never leaves you hanging on a guitar line even bordering on uninspired, as Van Drunen howls above the seething mass a slew of serious business lyrics that made most thrash and death metal of the 80s seem absolutely infantile by comparison.

Followers of false belief praise idolatry
Worship statues made of stone the adoration
Depiction of the gods in human shapes
Inhuman rituals, biblical transgression
A weapon in your right-hand, in your left a rosary
The polytheistic-monotheistic war
Believers of Almighty prepare to die
Explain to me, what are you fighting for?

For a closer examination, try the bridge riff and terrifying lead at 1:00 of "Subordinate to the Domination", which breaks for a dual speed/chug tag-team like a sped-up "Raining Blood". What of the frolicking, plague-stricken rhythms of "Chemo Therapy", which play out like a cancer ward patient uprising? What of "Commandments", with its creepy acoustic plucking that cedes for an escalation into turbine powered thrashing violence? The wormlike, gnawing death mutes that thread themselves through "Parridice"? The album even offers a few hints at instrumental grace, like the doomed acoustics of "Osculum Infame" placed against a background of swelling synthesizer and screeching, wailing electrics. Or the morbid, brightly blooded chords and dire melodies of the title track, which serves as an intro to the thrashing lead-in to "Antromorphia".

Malleus Malifecarum is unstoppable. It's a beast, superior to more successful thrash albums of 1988 like ...And Justice for All, So Far So Good So What, or The New Order. Yes, it was that good, even among the highly admirable company of that year's many other masterworks, like Death's Leprosy, Coroner's Punishment for Decadence, and Voivod's Dimension Hatross. The album delivers on all fronts: musically and lyrically. I would cite 'emotionally', except that the album is so highly successful at estranging emotions in favor of its volatile, murderous melange. There is not a single note here, even within the lead bursts that I would alter. It's a prime example of almost everything I loved about the late 80s progression of thrash metal from its crude roots of broken glass, street fighting feel-good misanthropy through its bachelor's, master's and finally pHD in artistic expression. Though this isn't my favorite Pestilence album, it's every bit as flawless as Consuming Impulse, disintegrates the vast percentile of other metal albums of the past 22 years until they become dust, and belongs at the forefront of any thrash or death metal collection of taste. No gods, new or old, can keep this titan buried forever.

Highlights: Every second on the slab. This is one operation you will NOT forget, even if anesthetized until even the sheep are counting sheep.