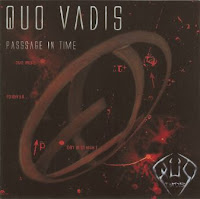 Just one year after Day Into Night, Quo Vadis were riding pretty high on buzz through the underground, due not only to the polish and relative accessibility of the album, but also to their technical merits. A trait not all that common in melodic death of the time, but highly popular among an emerging metal culture that was seeking almost anything of distinction to separate itself from the tired cliches of the past, and the relative drought of creativity that the 90s had ushered in after hard rock and metal took a nose dive from the arena to the curb. The time was right to strike, and thus Passage in Time comes as quite a handy little fan package, to tide the fans over until their third full-length, Defiant Imagination, which was still several years and line-up changes from happening.

This is no mere cash grab, but an offering in good faith of some new material, a few live tracks and the re-issue of the band's 1995 s/t demo, which ironically I happen to find among the best of their material, regardless of its production. So it helps that the very first track on this is a re-recording of "Vital Signs" from the demo, with the band's modern tone and crunch. This is a fairly stock thrash/death track with perhaps a bit of technicality, though the riffs are not nearly so complex as what we've heard on the full-lengths. They continue to use a mix of Carcass-like grunts and snarls, but there is an honest, vibrant energy to enforce the track's title. "As One" is a track very much in line with the material from Day Into Night: scorching melodic guitars, dynamic awareness and the band's signature lack of mundane repetitions. There is also a re-arrangement of the track "Hunter-Killer", also from the sophomore effort, but to me it does not seem worse for wear.

The live tracks included here are "Dysgenics" and "Mute Requiem", both also taken from Day Into Night, so it was apparent the band had far more confidence in this material than the debut Forever.... They sound decent on stage here, in fact "Mute Requiem" is clean enough that is nearly mirrors its studio incarnation. But the real rabbit in the hat here is the inclusion of the Quo Vadis demo, barring "Sans Abris", which was included with Forever... (and is rather weak due to the closing vocals, I might add). "Vital Signs", "Element of the Ensemble" and "Sons of Greed" all represent a cruder approach to the band's hybrid of thrash and death metal, and one I happen to actually dig. From very early on, this was a band experimenting with tempos and progression in their music, and though there are few individual riffs among this triad that stand out in my memory, I enjoyed the more brutal, hostile presence that is conjured not through the rough production alone, but the band's straightforward savagery (as in the middle of "Sons of Greed"). "Sadness", on the other hand, is a brief, throway acoustic outro which pauses for a hidden live violin segment.

If you're a Quo Vadis fan, than you'd undoubtedly desire this compilation for both the newer material and the chance to own the remainder of the original demo. I probably stand alone in believing that the band might have had more potential if they had persisted in the more punishing sound of the demo, but I found it refreshing regardless, at least for those three songs. Really there is only one new track, "At One", and it's consistent with Day Into Night, but maybe not enough to throw your money at if you've already got a demo. In addition, this is one of those enhanced multimedia discs which includes the video for "Dysgenics", which is a simple black and white shot of the band performing the song. It's not very exciting, but then, few videos are. In the end, other bands have done far more wrong by their fans than this.