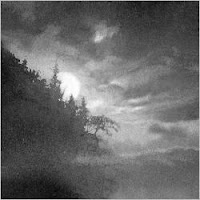 If you know black metal, you probably know those bands that go for the introspective, more poetic (if you will) brand of the genre. Whimsical, lyrical song titles. Typically tasteful album artwork. Presumably 'deeper' lyrics and concepts. You know the types. Agalloch, Wolves in the Throne Room, Leviathan, Blut Aus Nord, Blood of the Black Owl, etc. There are perhaps hundreds of bands like this. Well, (surprise!) here's another. Read on if you like what I've mentioned, if not, you can safely ignore this review.
The album begins with a lovely acoustic melody intro, then blazes into "The Thorns That Guide My Warpath," an epic track as blistering and raw as the title might lead on. Early into the twenty four minute piece there is another acoustic musing, accompanied by distorted guitar. It brings to mind mountain ranges, fathomless in their size, skirted at their base by ancient forests. Fitting, given Spectral Lore is obviously heavily influenced by the earth, perhaps even crossing into that realm of 'fuck your Starbucks and strip malls and your suburban sprawls, let's all go live in the forest' stance of bands like Horn and the aforementioned Wolves in the Throne Room. The song goes through phases in tempo, in mood, at the end becoming a practically lighthearted Norsk-sounding tune that I would happily raise my tankard of mead to.
Ecocentrism speculation aside, there is a lot going on here for those who enjoy atmospheric black metal. Tasteful synths and piano meander through, finding their place amongst the tinny blackened chaos. Spectral Lore plays a frantic black metal when they are in fact playing metal, with no lack of speed or gusto when it's called for, with curious vocals that are buried in the mix, otherwordly. Worth noting is that this is the work of one man, Ayloss, who knows his way around a drum kit and crafts some suitable riffs as well. I must say, though, no particular piece grabbed me, but as a whole the album is consistently interesting enough on the guitar side of things for me.
"Leaving the Stars Behind" sounds like, don't laugh, a My Bloody Valentine instrumental piece left on the cutting room floor. A wall of sound, that classic shoegaze sense of longing, yet with just a hint of malice. "Toward the Great Crossroad" is a vicious eight minute plus journey ending in grand electronic fashion, synths roaring a la Summoning. "Recoiling Beneath the Waves" begins as a very thick, gelatinous mass of sound, cutting off into drone/dark ambient, giving way to another song "Through an Infinite Dreamscape" which again begins with a torrent of ferocity and ends with relative peacefulness. Perhaps my favorite song on the album "Where Nature Will Never Yield To Man" caps it off with gorgeous synthscapes and a stunning climax.
II is what it is, a decent album that I've spun several times, especially when I'm in creative moods. However, there's not a whole lot here to impress people who don't dig on this brand of black metal. For that, I refer you to Blut Aus Nord's In Memoria Vetusta II: Dialogue with the Stars.
Verdict: Win [7/10]
Posted by JD at 4:20 AM