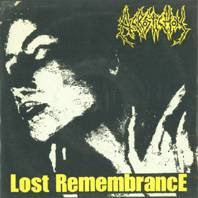 Pestilence. Creepmine. Sinister. Phlebotomized. The list of class act Dutch death metal bands to materialize in the 80s and 90s is a solid one, producing some of the more intriguing modifications to the genre while remaining largely unsung outside of the spheres of the mentally obsessed and dispossessed. Consuming Impulse is probably my favorite death metal album of all time, whether the revisionist world of the future regards it as pure death or thrash/death or fucking ice cream metal makes no difference to me. But beyond the ceaseless fellation I offer that masterpiece, I would be remiss to forget that there were just so many damn cool bands coming up around that scene, and one of them was a group of 'men' known as Acrostichon.

It's an interesting band name to be sure, meaning a 'word square' or a 'composition in which the initial or ending letters form a word/phrase'. Yes I did look that up. In contrast, Acrostichon may not have been quite so interesting as far as their style on this early release, Lost Remembrance, which came amidst a series of demo tapes and a few years before their oft lauded full-length debut Engraved in Black. One of the tracks here was remade from the band's 1990 Prologue demo, while the other pair are new to this release. Acrostichon could be viewed as a sort of midpoint between the Swedish and Florida scenes, which today might be a given for any death metal band, but in those days was a little less common. They've got a dense, ripping guitar tone and brutal vocals like some of the earlier Swede bands (Nihilist, God Macabre, etc) but a more morbid sense of aesthetics that recount Death, Obituary, and Autopsy.

All of these bands were relatively new themselves at this time, so the second wave was already taking their various pieces and reconstructing them into somewhat unique sounds of their own, and I think this is where a band like Acrostichon fit in rather snugly. These are brutal and simple compositions, the sort that have strangely come back into style (for the better) in recent years, and one shouldn't expect any of the climactic riffing of Pestilence or the more subtle intrigues of Creepmime. "Lost Remembrance" and "Mental Deficiency" are both midpaced sluggers that wrench and twist the guts out below Corinne's disgusting vocals. Oh, by the way, yes, they've got one of the original death metal frontwomen (vocals and bass), and she kicks fucking ass, with some of the swampiest, most mangled grunts of her day! "Dehumanized" has a little more thrust to it, a burst of grinding death after a brooding, brief clean guitar intro.

None of these songs excel in the riff department, but what they provide is a very staunch, morbid atmosphere which so many bands have returned to in the 21st century that you wonder why and how the magic was ever lost. The one huge downside to this particular release is that all three of the tracks appear on Engraved in Black, and the production on that album is monstrous compared to this rougher takes, so the actual value of Lost Remembrance is lost outside of the vinyl collectors and purists. But the material here is convincing enough to note that Acrostichon were onto something years before they made a wider splash, so if you're a younger fan of the genre just getting into the primal, old school fundamentals of death metal, give the band a listen!