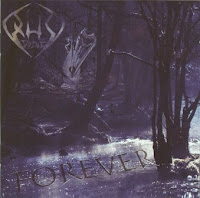 By the mid 90s, I was quite burnt out on metal music, having seen the entire genre climax between 1986-1990, and then suddenly, as through some cosmic event, a massive collapse of ideas in the face of the public's shift in interest towards grunge, industrial, 'alternative', hip hop, gothic and indie rock. I'm generalizing of course, and there were still a great number of strides being made in the newly birthed genres of death and (2nd wave) black metal, but apart from a rare gem from an established act, the more traditional sub-genres had dwindled into stardust. How did we go from albums like Master of Puppets, By Inheritance, No More Color and Coma of Souls to a heap of mundane drivel which couldn't even compete with the roots of thrash or speed metal?

It's like there were some giant, contagious lapse in ambition within the minds of even the genre's most seasoned creators, many of whom decided to jump off a bridge with fatal and unnecessary directional shifts in their careers. Though shortened attention spans and the most extreme forms of metal were beginning to take a stand against the more popular music of the period, it wasn't until the dawn of melodic death metal where the energy and momentum of the late 80s would resurface. Most of this developed overseas (later Carcass, At the Gates, In Flames, Arch Enemy, Dark Tranquillity, and so forth), and would usher in the giant wave of miserable clone-core that has yet to subside today. Here in the States, it was pretty much all death metal, or hardcore, or you were in the margins. But to the north, several Canadian bands were rising to the challenge, creating complex hybrids of thrash and death metal with an emphasis on both technical skill and versatility. Among these were Obliveon, Martyr, Neuraxis, and Quo Vadis.

Now, I'll be blunt. I've never really cared for Quo Vadis. Several within my circle of friends had begun to listen to them as early as their debut Forever (apparently one of them happened upon an import CD and the rest was history), and I've never quite understood the hype. To me, they were just another example of what I didn't enjoy about many new 90s artists: dull songs that attempt to impress through a technical edge alone, with very little writing ability. Surely the riffs on this (and subsequent albums) are not nearly as memorable as anything At the Gates did with Slaughter of the Soul, or Carcass did with Heartwork. But recently, as I've been going through so many of my favorite bands' discographies, I figured I'd borrow the discs and give this band another chance. Maybe I'll change my mind, eh?

Well, not with this album at least. Forever is the band's first full-length foray, and known for having a vastly inferior production to followups Day Into Night or Defiant Imagination. We're not talking a shit box recording here, the mix is quite clear (essential as the band are highly melodic and dynamic), but you can tell it's little more than a glorified demo level. As for the band's overall sound, this was ever one of their strongest points. They sound sort of like a mix of the later Death albums (Individual Thought Patterns, Symbolic, etc) mixed with melodic Euro death metal and progressive thrash. The solos are set to shred, the riffs are somewhat complex ("Legions of the Betrayed", "Pantheon of Tears", etc), and the arrangements unconventional. You won't find many standard verse-chorus-verse patterns in their writing, and the band likes to shift through a series of dynamics that keep the listener guessing.

These guys can play. Remy Beauchamp is a fiend on the bass, not to be shown up by the vitriolic axework of Bart Frydychowicz and Arie Itman, nor the seasoned foundation being meted out by Yanic Bercier. And while I wouldn't call them the most indulgent band of wankers this side of the Atlantic, they are certainly going to key you in to their individual. The band also incorporates a little experimentation through spoken word ("Mystery", "Nocturnal Reflections"), and they're fond of breaking for clean guitars, samples and so forth. Unfortunately, this experimentation also evokes some pretty boring breakdowns that feel alien to the band's more rapid paced thrashing, and a slew of vocals that today we'd probably attribute to an American metalcore band. Barks and grunts and screams and whatever it takes to force some emotion and momentum into the fairly forgettable music. One example of this is "Inner Capsule (Elements of the Ensemble Part II)", which opens with a hardcore yell alongside the grunting and sounds pretty terrible, with some scrawny death metal break rhythms that simply cannot save the clamor.

And that's really the biggest issue with Forever..., or Quo Vadis in general. Despite the obvious wealth of proficiency possessed by the band's roster, they simply cannot write a memorable riff here to save themselves. The songs are constantly evolving landscapes, and yet there is never some breathtaking surprise around any corner. You simply know there will be changes, and they will likely involve some wild guitars, furious bass playing and the inevitable eruption of leads. The over-arching note patterns are just not strong enough, and it's not saying much when the instrumental track ("The Day the Universe Changed") is the best on the album. The band also include a demo track from the previous year called "Sans Abris", a gentle, flowing piece with clean guitars and samples of howling winds that is suddenly destroyed by a shrill, inept female vocal near the track's conclusion, which sounds silly alongside the death bark.

I was far from impressed with this album back in the 90s, and it's even less interesting in today's climate. The songs are just as forgettable, and the band seems as if they're trying to pack in too many ideas, without letting any of them fully grasp the listener. The lyrics range from decent to mediocre, thoroughly existential garbage. Though malformed, the music is hardly a clutter, and I will at least laud the band for attempting something different. They sounded unique at the time, and they still seem so, but that's not always a selling point with me. Forever... might have the weakest production of their catalog, but it is the songwriting which really comes up short.

Highlights: Honestly, I cannot think of one. But if it's any consolation, their later albums are better than this.