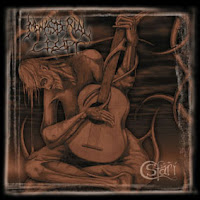 Czech act Monasterial Crypt: throaty death vocals, ho hum female clean singing, and a mixture of folk and melody-laden death/doom. Unfortunately the mix hampers the album somewhat, with the drums very loud to the point of almost drowning out the guitar and vocal work. Worth noting is the band has two guitarists and two separate vocalists, in addition to the bassist and drummer. Well, then.
The high points are when they're weaving the folksy heaviness accompanied by the harsh male vocals, but to my dismay the female seems to be featured quite a bit on most tracks. "Podzim a Stárí" begins with the chick doing some spoken word stuff, followed by lone harsh vocals, then they are briefly combined, then the guy doing clean stuff. The music is good enough in the song, but I kind of wish they'd just remove the female vocals (for most of the songs, not just this one) or perhaps find a female singer that's more capable, i.e. the incredible Masha of Arkona.
"Hloubka Skrytých Smyslù" is another example of the vocals just not working. At around two minutes they blend the two styles, and it just does not sound good. At all. Shame, really, because there's some enjoyable tunes. Nothing spectacularly memorable, but I could see myself spinning this once in awhile if not for obvious flaw. "Holotropie" is a highlight of the album, for once Veronika has a bit of conviction in her voice instead her normal boring tone. The melody sounds almost piratical, and if not for the Czech singing and the absence of a mind-bogglingly good hook riff and solo, I could buy it as a Running Wild song if I didn't know any better.
The band formed in '89 supposedly, and put out this (their only full length after a handful of demos) in 1999, and their status on Metal-Archives is currently 'unknown'. I would say this could be a decent starting point for a band, but I'm guessing nothing else will surface. As a side note, in their band photo they're all smiling. You crazy Czechs, everyone knows you have to look like you hate everything and/or you're too cool to be photographed!
Verdict: Indifference [6.0/10]
Highlights: Holotropie, Spálená Já
Posted by JD at 7:43 PM