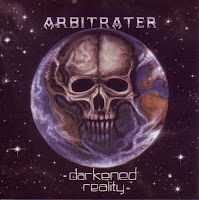 If Arbitrater could be accused of anything, it was that they arrived a little late to the scene of the crime. Their 1991 debut Balance of Power was a solid effort of forceful, driving thrash metal, but it brought little if anything to the table with regards to its writing or aggression. By 1993, the victims of thrash metal had all been tagged and counted, removed by the EMTs to the various local morgues for further processing, and even the chalk outlines have been washed away by the acid rains and blowing winds. But Arbitrater represent the stubborn patrol car that shows up anyways, bearing donuts and coffee that they are now forced to consume for themselves.

But let's be frank: coffee and donuts both taste pretty fucking awesome, so why not enjoy them all for ourselves? And that is what Abritrater have offered with their sophomore Darkened Reality: a bare bones, honest thrash metal album that succeeds despite the fact that very few were left to even hear it. This is not an incredible fast band, most of their tracks move along at a mid pace, occasionally aiming for a faster or slower tempo, but they let the weight of the writing fall on the rather glossy mix and the fact that many of their riffs are violent enough that the seasoned thrasher is going to start slamming his head on his desk anyways. They sound like a crude alternative to their countrymen Xentrix, with a big influence from the meatier, mid paced US thrash acts like Sacred Reich or S.O.D., with vocals not unlike later 80s Hallows Eve (this is Tony 'Rat' Martin, who would later go on to front legendary hardcore band Discharge).

This is yet another case of what you see is what you get, and there is nothing to Darkened Reality but honest, stripped down thrash metal with only the slightest hints at technicality (which further mirror Xentrix). Actually, it's pretty similar to Shattered Existence, with those cool, throbbing meathook rhythms that hook you but give you plenty of time to consider the situation. Nothing here even borders on ambition, but that does not prevent tracks like "Nightmare Vision" or "Deadline" from starting up a circle mosh. There are also a few thrash anthems here to which you can shake your fists in the air while reciting the lyrics, like the opener "Judge and Jury" which sounds like it might have fit in with Hallows Eve's 1988 album Monument. "No Second Chance" and "Suicide Commercially" (oh the irony) also have a number of decent riffs, the former starting with a wall of stacked bricks before smashing through it and returning to their street level. It would be interesting to see this band reunite and do a 'pure British street thrash tour' with fellow obscurity Decimator, but we all know the kids wouldn't buy into it, so obsessed are they with doing airlifts off the frenetic retro-speed ramp of a band like Gama Bomb.

Darkened Reality stands the test of time because it sounds good, and it sounds authentic. There are no tracks here which forced me to cringe or shake my head in disgust, and the riffing grows a little deeper once you explore their interior cavities. It's not going to suddenly thrust itself upon your all-time favorites list in the thrash genre, but you can definitely kick back, bang your head and enjoy yourself. And shouldn't Arbitrater deserve at least that much? Better late than never.