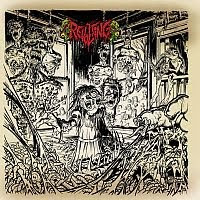 It must be hard being Revolting Rogga Johansson, the man of a hundred faces, each a death metal band (at the least the majority of them). Where does he draw the line between each of his projects? How does he keep all of their material straight in his head? Would he just tour as himself, picking and choosing from the vast arsenal of material produced through Ribspreader, Paganizer, Carve, Demiurg, Putrevore, The Grotesquery, Foreboding, etc.? How does the man partition his brain so that the various outlets don't run on with one another?

As long as he's putting out work like Revolting, which I'd consider one of his better bands overall, the answer to all of the above is: who cares. The Terror Threshold is the second full-length from this project, following up on last year's Dreadful Pleasures, and Rogga has seen fit to expand this release through the inclusion of a previously unavailable EP known as the Bonesaw Leftovers. That's 8 more tunes stacked on to the 9 here, for a total of 17 tracks and over 52 minutes of glorious, tongue in cheek old school Swedish death metal. Like many Razorback artists, Rogga takes much of his lyrical influence for this project from old sci-fi and horror films, and pairs it up with a grinding death motif which pays tribute to the forefathers of that scene: Entombed, Dismember, Grave, etc.

There is nothing terribly original happening throughout The Terror Threshold. It's certainly not the type of album that will appeal to the innovation seeker or the hallowed hipster. Regardless, it's ghoulish, harmless fun with the same consistency and quality of the debut effort (which was great), and has a little more depth than you might think. Good examples are "The Grip of Death", which infuses more than the normal dose of morbid melody into the grinding d-beat rhythms that so many of these retro bands simply cannot see beyond. Or the rather unusual, discordant streams of chords that wind through the intro to "Grotesque Beyond Belief". Or the killer, atmospheric melodies that cut through "Harvest the Humans", which remind me of earlier Unanimated or The Crown.

If you just want your spine carved in, well, Revolting can do that too: "Bloodthirsty Bitches", "Horror Hooker", "Destructive Organism", and the riotous "Head in the Fridge" have you covered. Some of the grimier numbers that close out the Bonesaw Leftovers EP are also quote good, especially the title track. "Grizzly Aftermath" is hilarious. Yeah. That's right. A death metal song about being mauled by a bear. The best thing about this, of course, is that you probably haven't heard that material before, so you can treat this all as one gigantic sophomore love letter to days when things were far simpler than this season's wank-off marathon of angst-ridden teenage barbarian 'virtuosos' attempting to one up each other while they dream wetly and often of Kristen Stuart and Amanda Seifert.

It's a great value, and few of the 17 tracks leave anything but a fond impression, but I do feel like the previous album was slightly stronger on the whole. But The Terror Threshold is the perfect fit for Razorback Records, and those of you who go postal over bands like Blood Freak, Ghoul, Frightmare, Crypticus, Vacant Coffin, or nearly anything else on that roster will have a field day with this one.

Highlights: Sure, especially Grizzly Aftermath. Because it's a bear. Killing a dude.