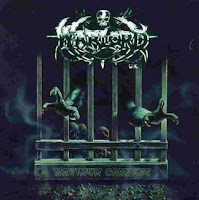 The unfortunate fact about metal music is that such a large percentage of the fan base consists of musicians in bands themselves that there are almost as many damn bands as there are fans, and thus only the most exceptional (or trendy) are pushed to the forefront through either the mosquito-like buzz of false promise hype or an amazing knack for writing songs and kicking ass. But there are just so many damn bands pushing and pulling that very few will ever make a big name for themselves, and most of the bands that are just 'good', even some that are exceptional, arrive and depart and are rarely heard from again. But some of them come back, for another shake at destiny.

Warlord U.K. is just such a band, who happened upon a record deal with Nuclear Blast that produced only this single full-length, Maximum Carnage, in 1996. Though the band has reformed a few years ago, there is little momentum for them to work with, since the album arrived during the desolate mid-90s when metal was a virtual wasteland and few artists were able to successfully navigate against the trends of the time. On the surface, there is nothing wrong with Warlord U.K., as they perform a deep and thick blend of thrash and death metal which feels like a midpoint between late 80s Sepultura and the more brutal fare of their countrymen Benediction and Bolt Thrower. Dave Ingram of Benediction even adds guest vocals to several of the tracks. They cover all the bases, from brutal grooves to mid-paced thrashing over double-bass rhythms, to solid leads, pumping bass guitar and an atmosphere compulsive to warfare and violence. The lyrics and song titles all feel fairy standard, but hardly pedestrian, and they merge quite well with the songs.

The problem really comes in with the lack of any real replay nature. Almost every song on Maximum Carnage sounds just fine while you're in the midst of it, causing you to bang your head in sections and dream the dreams of grim warfare that English bands like this excel in. But where the band create a rippling surface tension and cerebral violence aplenty, there is a lack of nuance or subtlety in the compositions that causes one to crave something a little more lasting. Few of the songs here rise above a dim chugging. Perhaps the slowly building thrash majesty of "Theatre of Destruction" or the splattering urban chaos of "Race War". But what's pretty interesting is that the band have committed over 15 minutes of the album's play length to cover songs, which seems a little strange for a debut. We get two Amebix covers, "Nobody's Driving" and "Chain Reaction" (both from the 1987 Monolith album), and Warlord does well to convert them into something that would fit snugly into a live set. The cover of Slayer's "Raining Blood" seems a little too obvious even for an album in 1996. The track has simply been covered a thousand times, and the Warlord version doesn't stand out.

The band is back around these days, and one imagines they'll concoct a more vicious and brutal edge to their sound to help combat the hordes of uber technical, incredibly guttural bands that now dominate the death metal landscape, or perhaps make due within the old school revival of late. As for Maximum Carnage, it's simply not remarkable enough to warrant recommendation. If you've long desired a more thrash alternative to Bolt Thrower, Napalm Death or Benediction, then this album might suit your fancy. Otherwise, it's just another band with some measure of promise, lost among the nuclear stockpile of metal's massive backlog.

Highlights: Theatre of Destruction, Race War, and some Amebix covers!