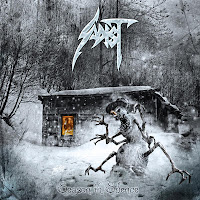 My opinions on Italy's Sadist have waxed and waned throughout the years. From the beginning (their debut Above the Light) it was clear that this was a band whose goal was to incorporate an unusual mood into their music through uncanny riffing structures and the use of the keyboard as one of the central components, which was rare in death metal outside of a few acts (Nocturnus, etc.) Before breaking up in 2001 for a few years, the band had recorded a few decent albums in Tribe and Crust, but also the ruefully trendy Lego in 2000, which saw the band strip themselves of any dignity remaining and attempt a shift into the generic nu-metal that even then was already on the lamb.

The band regrouped in 2005 and a few years later we had simply Sadist, which was by all accounts a fairy successful return to form. I thought the album was good, and on par with a few of the earlier works, but hardly an explosion of distinction. No, Sadist have saved that for this year's Season in Silence, their 6th album, which not only abolishes nearly all the band's back log, but also holds up as one of the most interesting metal efforts I've heard this year, if not one of the most interesting progressive death metal albums I've had the privilege of ever hearing. If the cover didn't immediately tip you off that something was different about this, it's also a conceptual album about innocence, childhood nightmares and a dire examination of nature and how it queues up alongside the span of human civilization.

Musically the album is a pinpoint balance of arching, almost mathematical death and thrash riffing with lighter keyboard textures that provide an almost wintry pop/jazz nature that firmly characterize the sadness and beauty of the environments summoned through the lyrics. It's a little hard to describe, because I simply have not heard much else like it. The guitars range from Candiria to Meshuggah to Cynic, all broiling under Trevor's harsh vocal, which is primarily a death bark straight from the gut, loaded with enough desperation and torment that you can feel each phrase resonate down your spine. The album is a very fascinating blend of temperatures: the lyrical setting and artwork conjures up the sensation of cold isolation, but this is contrasted by the very warm fabric of the jazzy synthesizer and solos. The fusion of such disparate elements is both welcome and rare, and if given a chance to work its way inside your thoughts, you'll be the richer for heeding its lessons.

I say 'given a chance' because though catchy, the overall album does require a certain amount of patience, not to mention the ability to dismiss certain predilections you might have towards its components. For one, while the keyboards are haunting and gorgeous, they are quite frontal...if you don't think they've got any place in death metal music, you'll absolutely hate them here. But if you enjoy synthesizers in other progressive metal, 80s horror scores or even moody image music from video games, you could feel right at home. The other thing to note is that, despite the level of talent possessed by the musicians, they are rarely indulgent. Each discordant, grooving or thrashing rhythm is restrained to suit the mood expressed in the lyrics, to complement rather than obscure the synthesizer. Each solo is carefully plotted to send a shiver of warmth through your soul, the bliss of a hearth in mid winter. The album is NEVER, in any way, a brutal death metal record. It's harrowing, in its own way, but not even remotely catered towards the mindless shoggoths that populate the BREWUTAL MAANG!!! end of the genre's fandom.

But see beyond such mandates and into the spectrum of illusion possible with well written conceptual music, and you could be highly rewarded as I have been here. The album is like a road-side curiosity...say a fixture in the ice, or a pattern of snow and tree limbs so striking that you've got to stop in the middle of your commute, turn off the engine and ponder it for awhile. And the more you stare, the more the anomaly begins to take on a life of its own. For Sadist and Season in Silence, this manifests in a progression of 12 tracks in 3/4 of an hour that will slowly and orderly peel back each layer of skin as it finds a murky, hidden rapture within the very landscapes and temporal portraits we so often take for granted.

There are a few instrumental pieces on the album which assist in this heightening of purpose and mood. "Aput" is like the opening credits piece for some cult 80s slasher flick about a deranged ski lodge stalker, while "Ogron" is a full blown progressive metal voyage with some superb, circular synthesizer lines woven through its laid back but sky darkening riffs. If Dream Theater were composing a background piece for another remake of The Shining, it might sound like this. The closing piece "Hiberna" is tranquil bliss carried by its light mesh of acoustic guitars, pianos and bass effects. As you can see, just these three pieces alone cover a broad spectrum and emotions, and they're not even a verbal part of the narrative!

The remainder of the album consists of a dazzling exhibit of inner torments as Sadist freeze the very spirit from your being, through a graceful aggression of chugged guitars, popping bass and smooth, corporeal solo work. As Trevor grunts and snarls through "Broken and Reborn", you feel right beside him, scratching at your scalp and tearing out your hair with every venomous line. "Season in Silence" ranges from dense, intelligent thrash to a piano/bass segue that radiates the warmth of the last rays of the afternoon sun. "Evil Birds" destroyed me with the atmosphere of its chorus and the carnal attitude of its riffing exercises. "Night Owl" flows like a stream of cold melancholy through a room full of low-key 80s progressive rock dreamers, their music store branded t-shirts tucked deep into their clean blue jeans, their mullets and thin 'staches flexing against the inevitable breakout of monstrous thrashing that Sadist will often explode into out of almost nowhere. "Snowman" is TERRIFYING, the perfect death-prog tribute to a not-so-inanimate figment of our shared youth. And while every song on this album is close to perfect, you may also wish to pay specific attention to the charging of "The Abyss" or the mystique and abandon of "Frozen Hands".

The album is quite brilliant all around, with only a very tiny percentage of riffs that don't take me as far as I need. It's highly likely that this is the single best album I've heard from Italy that has anything to do, even peripherally with the phrase 'death metal'. Beyond those borders, it's better than anything I've heard from Cynic. It's better than anything I've heard from Atheist. It's better than Testimony of the Ancients or Spheres from Pestilence. It's a marvel, as if the band knew it was time to put up or shut up. Well, they've put up more than their share, like that freak in your neighborhood that always puts out a hundred thousand Christmas lights to outshine the rest of you spiritless wrecks. And they deserve some bloody recognition for it this time. It comes down to a simple query: do you like good music or don't you?

If you answered yes, Season in Silence will freeze you in your tracks.