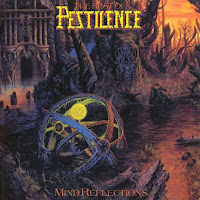 You can just imagine the board meeting for something like this...

Suit 1: Guys, Pestilence haven't really done much to fill out that record contract, we're going to have to either hire a band to pretend they're Pestilence, or put out a bunch of stuff that we've already put out...

Suit 2: Ugh. Not another compilation. The band only has four fucking albums...and anyone who cares already owns them. Just how stupid do you think their fans will be?

Suit 1: Their fans are probably goddamn idiots anyway. I mean, who cares about death metal? Nu-metal's on the way in, and we've got lots of new signs coming up. And judging by these sales records, hardly anyone bought their jazz album Spheres last year. Who wants to listen to a death metal band play Al DiMeola in space?

Suit 2: True. Well, let's give them something. I've got it. We'll pull a track off a compilation or demo, and then fill in the end of the compilation with some random live material.

And lo, it would be. The first official compilation of Pestilence material, culled primarily from their four studio albums on Roadrunner. As if there were that many followers of this band who really wanted to buy it all twice! But of course, if many lesser bands were given the treatment, why not Pestilence? One might argue that Mind Reflections is a worthwhile purchase for the initiate, but then again, for just twice the price, that same initiate could spend his or her money on two of the best death metal albums out there. Either way, in the end, it usually doesn't matter who approves of a compilation like this, because for the most part, it's a damned ripoff and not worth the time or investment. But somewhere amidst its depths, Mind Reflections has an ace up its sleeve, a fat, taunting carrot that almost snaps the stick in two.

Let's first examine the re-released material. From Malleus Maleficarum, they've included both "Parricide" and "Subordinate to the Domination". Both good choices, but ask yourself, would a poor choice even be possible from such an album? Still, "Chemo Therapy" seemed like it was a fairly popular song from the album, so a little surprising that it wasn't included (though a live version is). You can't really go wrong with anything off Consuming Impulse either, with the possible exception of "Proliferous Souls", which is simply because it's an instrumental/intro. They've gone with "Dehydrated", "Out of the Body", and "The Process of Suffocation", all of which are superb. And thus ends the Martin Van Drunen era. "Twisted Truth", "The Secrecies of Horror", and "Land of Tears" are all included from Testimony of the Ancients. Perhaps "The Secrecies of Horror" could have been replaced with another track like "Lost Souls" or "Presence of the Dead", as it's not a great selection, but otherwise, no complaints. Spheres, which only released the year before this compilation, is represented only by the title track "Mind Reflections". Nine tracks does not seem like a very thorough amount to include on a band's compilation, but since this is basically a means to some quick cash, it was unlikely they would extend it to two discs.

However, nestled among the pre-released studio material is a rare track from the Teutonic Invasion II compilation from 1988, titled "Hatred Within", which seems like an outtake for the Malleus Maleficarum recordings. It's a pretty badass tune, with some wicked, Slayer-like riffing molded into a brute death/thrash engine, with messy solos and Martin Van Drunen's killer presence as the master of ceremonies. In particular I enjoyed the brief melodic bridge after 1:00, and the bridge where the track picks up the pace, but the song seems just subpar enough with comparison to the debut album's material that you can ascertain why it wasn't included there, and the compilation came out the same year as the album...so it was unlikely to come with the original CD as a bonus track. As for later pressings...it would have been excellent.

The final six tracks of Mind Reflections are live from the Dynamo Open Air festival in Holland, 1992, with the Testimony of the Ancients studio lineup. So if you hadn't ever had the chance to see the band perform, and had not yet heard Mameli's vocals over the band's earlier material, here was your first chance, and since these still sound better than the live material on the Chronicles of the Scourge compilation, they add a touch of value to this disc. The live tracks are "Dehydrated", "Chemo Therapy", "Presence of the Dead", "Testimony", "Chronic Infection" and "Out of the Body", and it makes for a pretty effective little set, even if the recording is not top notch and Mameli sounds a bit more deep and bloodied than his studio vocals. Which might be a good thing, come to think of it, as it brings him closer to Van Drunen's originals.

There's no real reason to waste any of your pay on Mind Reflections unless you're a collector, or like myself, you were so starved for rare material that "Hatred Within" was all too tempting to pass up. Otherwise, your money is better spent elsewhere, perhaps on the 2-in-1 release of Consuming Impulse/Testimony of the Ancients which is a complete steal at the same relative price. The live tracks are decent, but only because you've got no other alternative. These days there is the Chronicles of the Scourge double-live album, which has old 80s sets with Martin Van Drunen at the microphone. But the sound is just too rough. Nine of these 16 tracks were an immediate throwaway, and the six lives are mediocre quality...that doesn't leave much to sink your teeth into. Pull the fleece from your brain, and buy another death metal album instead, especially a Pestilence.