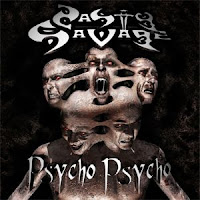 With the enhanced re-issue of Wage of Mayhem and some live dates under their belts, it was only a matter of time before Nasty Savage would grease the elbows and head into the studio for a new attempt at full-length album glory. The result was the 13 track opus Psycho Psycho, which stylistically sticks as closely as possible to the prior few albums, albeit with a darker modern style. All of the hallmarks return: schizophrenic thrash metal with its roots clearly laid out in the sphere of American speed/power, Nasty Ronnie's scatterbrained vocal delivery, and lyrics that delve into the psychological, sexual and society at large.

While Psycho Psycho is not one of those trailblazing, inspirational comeback albums that arrives once in a blue moon, it has enough choice moments to at least keep it hovering above the pit of endless suck that so many reforged acts sink into. A few of the songs here rub me the wrong way, through either the vocal patterns or the riffing sag it tends to take towards the middle, but others truly capture the spirit of their 80s material, and one cannot feel any disconnect as far as the band's intent to remain loyal to themselves and what their mostly diminished fan base would expect of them. But I definitely get the vibe here that the songs could have used another comb over before sending the masters off to press.

I'll start with a few of the better songs. "Hell Unleashed", once it clears its opening vocal sample, becomes a pretty raging speed/thrasher. I'm not entirely in line with the vocals, as they seem to lack some of the energy and dual split range of prior attacks, but I do think the delay he's added to them slightly compensates, assisting with the impact here. The solo section is standard thrash rhythm over which a bluesy lead wails out with determination, and there is no hidden, amazing riff anywhere in the track, but it's solid and reminds me of Indulgence. "Merciless Truths" is wedged in at the end of the album, but it's a solid mid-paced track with some of the band's signature thrash arcs that you can totally square off to. Once more, the vocals don't completely blow me away, but the leads are cool, and I enjoyed the melodic finale as it faded out. "Anguish" is another of these slower fist-bangers, and the title track "Psycho Psycho" is a solid lead-in to the album, though the refrain in the first verse of 'slave of passion with a cerebral erection' felt a little lazy, like an impatient 13 year old lyricist.

For the rest, well few of the songs had any impact at all. "Human Factor" and "Terminus Maximus" try and coddle you with big, manly, obvious vocals, and the latter has a kind of morbid haze to it, but when they pick up the riffs are simply not so interesting. "Dementia 13" is not a cover of the sneering (and in my opinion, underrated) Whiplash tune, but a pretty average thrasher with a lot of bass in the intro and no major payload. "Step Up to the Plate" has a strong opening section and some demented verse rhythms, with a pretty brutal chorus, but I just could not get into Ronnie's vocals. "Triumphal Entry" and "Betrayal System" each feature at least one decent riff, but overall they feel rushed and very easy to skip. The band also includes a rehashed version of "Savage Desire", from the Wage of Mayhem demo, but the old school Diamond Head, Venom feel to the central riff feels out of place with the rest of the album. Almost like they're including a cover song, even if its one of their own.

I wish I could stack some more praise upon this effort, but even the better songs I mentioned earlier in the review do not compare to the material found on Indulgence, Penetration Point or the Abstract Reality EP. A Chris Jericho guest spot can't really save the album from its ultimate feel of mediocrity. However, the band deserves some credit for not attempting some radical shift in style, and trying to get back to the basics which made them one of the better thrash acts of the South in the 80s. It's already been six years since this album was released, and there has yet to be a follow-up. But I do hope, that if they are to enter the studio again, they'll take with them the same passion and emerge with a better set of songs.