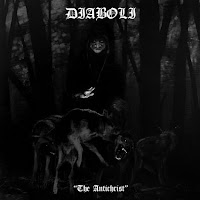 I'm getting to the point where I've got so many black metal bands to choose from for that instant, grim fix that I rarely know what to reach for whenever the impulse arrives to darken my day with a colossal fuck you to my environment. But it's a 'safe' bet that when you grab something off the Northern Heritage roster, it's going to be as cold and straightforward as they come. Diaboli is one of Finland's longer running black metal acts, notable as a solo act for about half the band's existence (the second member of the band died in a 2001 suicide), and almost predictable to a fault. Fortunately, the hellish energy Petri Ilvespakka conjures enough punkish abandon and raw, tyrannical chord-slaughter that you simply won't have time to rue any lack of deeper, complex songwriting.

This is Diaboli's 5th full-length album, and admittedly more fueled by thrash and punk aesthetics than some of the prior efforts. Take a healthy if expected dose of Hellhammer and Bathory, write a few basic riffs around this influence and then lavish them in sadistic, Satanic intent, with lyrics that could not be more pure for the genre (or impure, if you will). In 35 minutes, it's here and gone in a sulphurous but satisfying flash of brimstone. I personally enjoyed the deep growling that indoctrinates the opener "Cursed Be Thy Name", which erupts in a storm of hostile blasting, chowder-thick bass and searing, simplistic chord patterns. The track does take a turn for the somber and glorious with some of the rather laid back leads that plummet across the bridge riffing like a clipped angel spiraling to its new life of sin.

Other notable tracks here include the fell majesty of "Malicious Satanic Vengeance", a mid paced mourning centered about Petri's mixture of guttural grunt and rasp; the solemn yet strangely graceful "Emptiness", or the spine rupturing "Grim Winter", which succeeds despite the rather generic title and predictable, steady blast of its bass and drums. "Death of the Soul" is a 4 minute swelling keyboard instrumental which is extremely primitive, and yet mildly alluring. The rest of the songs fall in line with what is expected, but just didn't strike me as all that important.

Innovative Diaboli is not, and there is really no other reason to spin this disc unless you know what you want, and what you want is a solid black metal album which draws heavily from the roots of Bathory, Mayhem, Hellhammer/Celtic Frost and the Satanic credo to which so many of its peers adhere. It's pretty close to its predecessor Kirous in overall style and quality, perhaps a little more powerful, though I think I prefer the first three albums for their frostier, primordial taint and more wicked vocals. If you like the rather orthodox black metal of Finland (like Horna, Behexen, Sargeist or Satanic Warmaster), Diaboli is another artist that should draw your attention, and a quite underrated one at that.