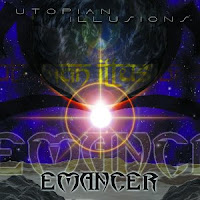 With a cover image that recycles many old nightmares of horrible prototype 90s computerized 3-D imagery and the hackery of the halcyon days of Photoshop, one might not immediately guess that the contents of Emancer's debut Utopian Illusions involved some of the most straight forward and boring Norwegian black metal ever laid down on disc. You might even think the band would have something in common with the more cosmic black metal acts of that world like Lunaris, Tidfall or Limbonic Art, and while there are some similarities in the rather bland composition of the riffing, this band had begun as only a vaguely futuristic approximation of the entire 'cyber' black metal identity, an aesthetic they would further explore on their later (and better) albums.

No, Utopian Illusions was as predictable as they come, with only the occasional use of electronic impulses in the atmosphere to differentiate it from most of the other ho-hum, middle of the road acts that were tired even by the dawning of the 21st century. Emancer had arisen from Utumno, not the Swedish band but a Norse occult black/ambient which released a pair of demos in the late 90s, and this change of face seemed a rather natural evolution into a new epoch. It's too bad then that the music written for this debut is so uniformly uninteresting, with patterns of riffing that feel as if almost no thought were poured into them, streaming along in various sequences that inspire no surprise, no menace, and no long term memory. It is left to the vocals and the rather mundane implementation of the keyboards to try and stir up an atmosphere, but unfortunately even these feel dialed up, like the band had to write and record this album in only a few days.

Self-caused demostic destruction...
This is madness you say, and maybe is it so...
Still wonderful to my heart
An obsession, no doubt, for the silent emptiness...

A few of the songs dare to reach an inkling deeper into the soul, like the melodic charging that opens "Boiling Sulphur" or the throbbing, morbid ambiance of the "Vengeance" intro, but even these are of themselves void of even the appropriate bleak vistas one would expect from black metal that he or she sought out not even to enjoy...but to bask in. For almost the entirety of this 40 minute exercise, the guitars surge forward in numbingly stagnant linear paths that evince no wonder, and no sacrilege. The final track "Lysets Bortgang (Light's Demise)" gathers a little darkness with its opening momentum but then blows it all on the slot machine of dull, antiquated riffing that probably wouldn't have been acceptable on a Burzum LP in 1992.

I realize I'm being a little rough with this album, because it sucks, but one should not entirely write off Emancer based on this sour note alone. Though the band has never been one to write scorching hyperblasts of memorable Norse intensity, they will later improve by leaps and bounds, beginning with the tighter (if also easily forgotten) sophomore The Human Experiment, and culminating in half-decent melodic black metal efforts like The Menace Within. But this debut is one of those obvious cases in which you CAN just a book by its cover, because the quality of the one is equivalent to the other.

Highlights: where is my eyedropper?