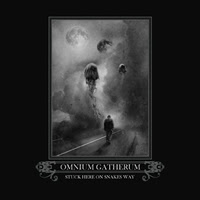 After the underwhelming 2004 sophomore album Years in Waste, the once promising Finnish upstart Omnium Gatherum decided to NOT waste the next few years, acquiring a new vocalist Jukka Pelkonen (also of Elenium) and keyboard player Aapo Koivisto. The changes were for the positive, at least in the case of Jukka, who has a deeper, more interesting vocal style than Antti Filppu, rarely getting overpowered against the musical backdrop like his predecessor. A few years pass, and the band releases the third album, Stuck Here on Snake's Way, which strangely seemed to receive as much critical castigation as its predecessor...

The reason I found the reaction strange, was because I rather liked this album when I first heard it. Even more unusual, is that the album seems less complex than its predecessors, yet more immersive. The guitar work in particular has softened into a series of basic chug and rock rhythms, often bordering on nu-metal levels of simplistic groove, and yet through the momentum of the song writing, the subtle atmospherics of the keys, and the improved vocals, it delivers almost an hour of consistent enjoyment. Lazy and inarticulate it may be compared to the rest of the band's catalog, but the daftly titled Stuck Here on Snake's Way might just be my favorite effort yet from the Finns.

The album opens with a glimmering, memorable acoustic intro called "The Snake and the Way" before abruptly changing channels to the rather cheesy groove/rock rhythm that opens "Into Sea". Oddly enough, the song does transmute itself into something approachable, with a nice melodic lick and atmospheric, driving verse ala Soilwork with some synth lingering against the horizon, but my favorite moments are the muted melodies that cascade across the choruses. "Dysnomia" is a straight ahead heavy rocker that almost hinges on a d-beat/grind rhythm for the verse, Jukka splattering all over it aggressively. "A-Part of God" has another very cool descending guitar line over some nu-groove guitars, the keys emitting a glitter at the edge of the riffing, but this isn't one of the album's strongest tracks.

I rather like "Undertaker", if mainly for how the simple, subdued synth intro flows over the rolling chug riff, and then returns for the melodic climax, and the brief and often proggy "Bastard-O" ranges from another straight rocking, rather generic melodic death charge to a powerful emotive melody wherein the keys scream like some poignant 80s prom pop alongside the vocals. "The Third Flame" is one of the more potent and powerful tracks on the album, conjuring up a reflection of their debut Spirits and August Light, where "Just Signs" opens in a river of clean guitars while we get a taste of Jukka's tasteful, low and clean range. The guy would make a decent gothic metal singer. The rest of the songs are solid, with two of the late heavies "Drudgery" and "In Sane World" among the best of the album, both laden with catchy, simple riffing and uplifting melodic summits, and some great surprises like the spooky, urgent breakdown at 2:45 of the latter.

I cannot claim that this album has held up for me completely in the few years since its release, but I still enjoy it from time to time, and along with Spirits and August Light it's makes for the best of their body of work. I'd recommend if to any fan of a band like Norther or mid-period Soilwork, but do keep in mind that the band went out for something simple and effective rather than some dense effort like the first two, and its use of often lazy guitar rhythms (few individual riffs rise above the most basal of chugging to anchor the synth, vocals and beat) might turn off any who wince at modern metal sounds. The lyrics often involve subtle word plays with lines like 'Reason the real son' and 'the first to aid, the worst aid kit' which i found curious and somewhat appealing.

Stuck Here on Snake's Way sounds solid, with a crisp tone to the guitars that balances quite well with the keyboards, and the vocals are a definite improvement, the best of any Omnium Gatherum album. I was pleasantly surprised with it, and it's probably one of the better (and subtler) 21st century melodic death albums out of Finland, barring the highlights of a few other bands like Kalmah, Norther and Mors Principium Est.