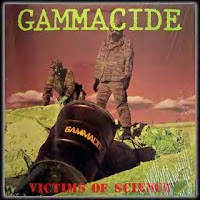 Hailing from the arid wasteland of Texas, Gammacide would be in the ideal setting to craft a masterful thrash metal on the affects of nuclear war and the inevitable fallout that would ensue. Recorded in what could be considered the apex of the US thrash movement, the late 1980s, Victims of Science, their first and only album, crafts an amazing mix of blazing guitar riffs that come at you with a precise, stomping crunchiness, epitomizes all that is good and just about what the true thrash sound was during that eventful decade. One has to remember that many of the thrash records that are considered to be classics, the standards by which the young whippersnappers of the new trash revival scene are judged, were born out of an age of patriotic hyperbole and the very real threat of nuclear war. That sentiment and feeling can truly be felt when you listen to the songs on this album which offer insightful, intelligent lyrics on a range of societal ills that even hold water in our current time and age, and in some cases, even more so than ever before.
The songs are short, but fierce. The distortion of the guitars, along with the lightning-quick drumming make for a great experience. However, the band does not fall into the trap of forsaking technical flourishes for the sake of being over the top, pure thrash. Vocals on the album have a tinge of the hardcore influence to them, reminiscent of some of the bands of that ilk coming into their own right around the time (think Insecticide) and painting a brilliant example of how closely hardcore and thrash really are when it comes to not only lyrical and emotional content, but even musical styling. When the hardcore influence comes across right, it is a treat to listen to.
A few of my gripes with this album would lean towards the lack of any memorable bass lines besides the simplistic one that seems thrown in on a whim in 'Gutter Rats', and the somewhat tinny, non-aggressive sound of the drums that comes across in a few of the tracks, especially in 'Walking Plague'.
All in all, for one of the near benchmark, ideal thrash albums from the late 1980s, Victims of Science is worth the time and investment of a listening session. Maybe a few dozen listening sessions.
Observe, and tell me what you see
Turn your back, blind to reality
Society condemns its own fate
Wake up before it's too fuckin' late

Observe, and tell me what you see
Turn your back, blind to reality
Society condemns its own fate
Wake up before it's too fuckin' late
Verdict: Win [8/10]
Posted by HEYMAN at 7:15 PM