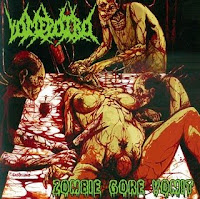 If you've somehow managed to make it past the album cover and into the music of Vomepotro's debut Zombie Gore Vomit, well then congratulations: you are just as desensitized as I, and possibly beyond all redeeming qualities in this or any life. I kid. Let's just say that Vomepotro knows how to grab your attention, whether through a retch induction or a carnal fascination. At any rate, while the Brazilian band's first album was nowhere near as viciously toned or magnificently explosive as the more recent Liturgy of Dissection, it showed a promise that very few of the band's Brazilians have brought to the table: quality songwriting that often eschews the blind speed and occult fathoms of a Krisiun or Rebaelliun for some deep taut riffing patterns that seem a hybrid of Cannibal Corpse and later Impaled, but with deeper guttural vocals and a better sense for traditional leads that zip in and out of the visceral rhythmic scathing below.

Zombie Gore Vomit is pretty good, though I didn't feel all the songs reach the same level of quality established fairly early on with "Sacrifice Bloody Cult", a great track that cycles through a number of well-planned rhythms and a bristling lead at the minute mark. The clarify of the mix is highly effective, and the thick, festering vo-kill broth serves as a rhythmic foundation over which the surgical, licentious guitars frolic like demented children on a field trip to the local autopsy lab. Other tracks that stood out including "The Head Smasher", which lurches to and fro through a somewhat complex set of slower rhythms and some tight, barbaric drumming from Andre Martuchi. "Sucking Umbilical Chord" opens with a wall of disgusting feedback before a battering akin to later-day Cannibal Corpse, loaded with serial killer thrashing riffs, though a somewhat average chugging breakdown. "Necrodemented" and "Violating the Dead" also harness adequate moments of revulsion, but not so much for specific, standout riffs as the entire corpse catapulting experience.

Overall, though, the album is not highly memorable in the wake of so many others of its kind. The performances are competent, the cover art grisly enough to endure in your brain, the mix clean and professional for such an underground act (though some might argue the vocals are a bit loud), and the writing violent enough to maintain the attention through a few listens. The lyrics and lyrical themes are all pretty average, having been beaten to death by Cannibal Corpse and many other bands (though the Brazilians take it pretty far with scenes of necro-pedophilia that made me cringe) and the overall force of the album is simply not at the level of butchery the band will commence with the follow-up, Liturgy of Dissection. But considering how many of the band's South American peers focus entirely on brutal, monotonous speed and a lack of compelling dynamics, Vomepotro's tightened dynamics and 'quality over extremity' ethnic makes for a solid, sick, seductive introduction.

Posted by autothrall at 8:10 AM