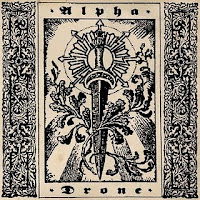 Such is the passage that concludes the liner notes for the self-titled debut of John Gill's Alpha Drone, a margin walking musical entity so far departed from the ball & chain of convention that it defies reality itself, assuming an alien configuration safely outside the confines of simple classification. At its core, you may very well identify with some fraction of the whole. There is a black metal influence here, or something that once called itself black metal, now a mere reflection in a dissonant stream of harsh, distorted vocals and the subdued, bitter flow of guitar chords that creep across a recessive, programmed drumming which exists solely to measure the momentum of the listener's descent into madness (or ascent into nirvana, your choice.)

But that description alone would be selling the music sort, for in addition to its raw, metallic components there is an overarching, ambient sadness throughout the near 40 minutes of this album. Not the gentle gleanings of an emergent Brian Eno, mind you, but the foreboding of the free form noise, ritual and martial genres, convergent upon this one, single cipher of expression. Having delved into the works of many such artists in my time, I can tell you that Alpha Drone does not quite sound like any one other. To forge a direct chain of recognition is nigh impossible. But try and dream of an electric-age Beherit jamming to Lustmord, or an Abruptum chilling by the pool, Raison d'Etre in It's headset. Or perhaps an extra terrestrial interpretation of old Summoning with a spark of the late Muslimgauze's more twisted emissions. This is an electric array of names I'm dropping, and yet Alpha Drone conforms to none of this.

But it's just as far out.

The inspiration for the project's name comes from an old science fiction tale the creator once drafted up in some earlier flight of imagination. Imagination is a positive thing. I'm a space cadet myself, engaged at any one time in a myriad of science fiction, fantasy or speculative media that challenge my perceptions and fuel my simultaneous addictions to nihilism, nostalgia and boldly asserting myself where no cosmonaut has gone before. So the concepts behind the compositions of Alpha Drone intrigue me, especially after a perusal of the album's archaic visual aesthetics and the extensive food for thought provided in the liner notes. There are no lyrics printed in the CD, but I've read that they follow the liner notes pretty closely. Ancient civilizations, elements, cycles of existence, the illusions of modern science, the farce of religion, all of these are considerations behind the music. The album is akin to having an existential archive of history, philosophy and every thoughtful (if theoretical) History Channel pseudo-documentary about religion, extra terrestrials, conspiracies and the coming Armageddon slowly hammered into your left temple simultaneously with an iron piton. When was the last time you enjoyed such a feeling?

The experience of Alpha Drone is delivered through five separate acts, each of which takes subtle liberties from another, deftly avoiding the chagrin of monotony that might develop if Gill were to simply follow one idea beyond its welcome. Other artists might decide to forcibly bludgeon the listener with the same cycle endlessly, mistaking an inflated flair for minimalist drama as effective expression. Most of these have failed. Gill doesn't even attempt such folly, because his universe is just too damned vast to dwell for too long on one caustic spark. Truth be told, there is some sense of numbing repetition here, in particular with the 15 minute epic "Shambala Serrano", but hardly impossible to digest, since you'll be reeling from the uncanny procession of deep, throat chants, distorted background chords, harsh vocals hinging on the edge of pure distortion, and most impressively, a keyboard sequence worthy of any truly ghastly 70-80s horror film. And even here, the tempo shifts from a crawl to a more punishing, slowly blasted segment over which an additional synth alights like a star signal from afar.

The rest of the tracks are not so extensive, but equally riveting. "Theozoology" is the opener, a swelling opus of trembling noise that slowly introduces a distant, martial percussion battery, a vibrant yet thin flourish of frightening organs, clean if subtle guitars, and ungodly distortions that sound like Galactus is slowly taking a chunk out of your world. The vocals arrive after 3:00, like a late warning, and then a deep chant carries the track out. "To Take Earth Back from Man" is a terrible joy despite its extremely wish-wash, background feel, a melodic black/ambient metal charge erupting beyond a martial chant segment set to the samples of storm. "Akashaganga" is as desolate as anything Malefic or Wrest have penned, a subdued, submissive stretch of horror so void of warmth and hope that it would perhaps best serve as a soundtrack to Lord Byron's classic, end of times poem "Darkness". The album has been so punishing to this point that the shimmering rays that open "The Sophonaut" come as a total surprise, for somewhere within the guitars is a distant wisp of hope. But it fades out all too soon, into voice samples and throbbing, electric atmosphere that sounds like an Elder God dropping bong hits dangerously close to a Tesla machine.

I don't know John Gill personally, and I'm not familiar with his other projects (of which there are a good number). It took me some time to fully digest what I was listening to on this album. Weeks. Into months. But all of the most interesting works do. Alpha Drone is not an act that will reward you with any semblance of bold melody or conventional metal structure. It's instead a fabric of finely woven, alien torment, threaded through the grasping talons of the Fates into every awaiting orifice. There is no hiding from this end. You can complain about the album's roughshod production (it was created over a number of years), and you could attempt to write it off as mere noise, reveling in its own liberating obscurity. But then you wouldn't learn anything. Alpha Drone feeds your head. And it bleeds your head. I haven't heard anything quite like it before, and I'm not sure I ever will. I'd like to think even Alpha Drone itself would move forward from this, as there is nothing to improve upon. Only more to explore. And isn't that last word the key?

Highlights: Earth is still here. For now. It was not eaten during this recording.