Pestilence - Chronicles of the Scourge (2006) 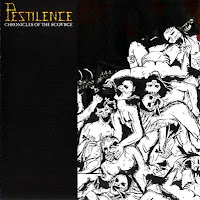 It's pretty hard to imagine the downside of releasing a Pestilence live album, even if its almost two decades past due, and the live shows in question were recorded in the late 80s. In fact, if I kept a short list of live album demands from any metal acts, this is one that would be close to the top. And since Metal War was likely releasing this album straight to the collectors and old school death metal maniacs who were still lauding and supporting the Dutchmen after all these years (before the 2009 reunion effort Resurrection Macabre), one cannot really fault them for releasing these performances as is, with no modifications.

But sadly, Chronicles of the Scourge turns into a double edged sword with regards to the actual quality of sound. The material here is culled from two live performances: the first (10 tracks) at Holland's 'Kix Festival' back in June, 1989, and the second (8 tracks) from an earlier German performance in November 1988. All the songs are very much identifiable to their source material, with a chunky and dark live tone, but having actually seen the band perform in North America back in the day, I can honestly say that the quality of the recording does not do them justice. For one, Van Drunen's vocals sound rather terrible on both performances, in particular the Dutch show, where he sounds a lot deeper and raspier, almost like another vocalist. His vocals are captured with more clarity on the German performance, but even then they don't sound all that great, and the overall tone of the band feels rather cruddy and blocky. The drums and guitars are audible, and something low that resembles a bass is racing along beneath them, but if I wasn't already intimately familiar with the band's earlier albums I would have a hard time following it all.

Since the band had limited material out in an official form back in these days, their set list was drawn from only the debut Malleus Maleficarum, with a few tracks from Consuming Impulse. This means a little of an overlap in the track listing, with "Parricide", "Chemo Therapy", Subordinate to the Domination", "Cycle of Existence", and "Antropomorphia" all appearing twice. To this extent, the more recent performance in Holland benefits from having some newer material: "Echoes of Death", "Out of the Body", "Suspended Animation" and "The Trauma", but they all sound rather raw and fresh, especially with the off-putting vocals. Though they don't benefit from Martin Van Drunen's presence, the live tracks added to the 1994 Mind Reflections compilation sound better than these in every imaginable way, so we'll have to just appreciate those until the inevitable reunion tour DVD/CD.

However, Metal War were not negligent of this live compilation's rather limited appeal, and decided to include a few rarities that it might be more easily digested. This includes the raw and gritty instrumental "Consuming Impulse", which did not appear on the album, but is quite a tasty, menacing morsel, albeit rough (it seems parts of this track might have been dissected and reconfigured for the Resurrection Macabre album). Beyond this, they included an entire bonus disc called The Consuming Rehearsals from 1989 which is pretty cool, if extremely rugged, with the vocals difficult to make out. Interestingly, "Testimony of the Ancients" appears with the material that would actually appear on Consuming Impulse, as well as the "City of the Living Dead" acoustic intro that appears on one of the live performances.

Chronicles of the Scourge is sadly not the ultimate fan package Pestilence fans of old might have been awaiting, and not even a good one. But the label at least attempted to make it something other than a ripoff. The bonus rehearsal material is nice, the live material not so much, and nothing here would distract you from simply spinning Malleus Maleficarum or Consuming Impulse in its place, but if you're a collector of live or bootleg material from your favorite bands, it might be worth buying only for a sense of completion. Otherwise, just try and see the damn band live, even if YOU are a few decades over due. I hear they are back together...