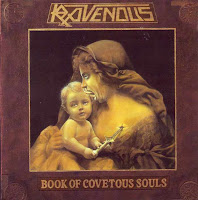 One of the elements that has always stood out most about this album is the somewhat striking image of maternal mockery that graces its cover. Cheesy, perhaps, but it's also rather classic, allowing it to stand out among the hordes of gas-masked or skeletal figures that so often transformed thrash albums into an exposé for the cold war mentality. Fortunate then, that Ravenous turned out to be a fairly promising power thrash trio capable of 45 minutes of neck breaking riffs and aggressive entertainment. You wouldn't know it, of course, since 1991 was on the late end of the movement, most of its best sellers (outside of the 'big 4') come and gone, and very little room left in the hearts and minds of the average, wary thrasher, who had hung up his high tops for a pair of doc martins and started listening to Pearl Jam and The Jesus & Mary Chain.

Yeah, Ravenous were a three piece, and while they didn't have even a fraction of the musical proficiency of a band like Coroner, they still kicked ass on a few of the tracks here. Book of Covetous Souls is their sole album, but unlike most similar bands that flew in, took a squat in the studio and then had to hitch the next bus out (biting off more than they could chew), they left an enduring legacy of one finely produced album, somewhere between the brute force of Sepultura's Arise and a less adroit adaptation of Kreator's Coma of Souls. Though the album does seem to blow its wad early, using up most of its more aggressive stockpile of riffs, I still found myself willing and able to mosh through the remainder of its contents. Of note here would be the delivery of vocalist/guitarist Jo, who sounds like a Frankenstein molded from the flesh of Max Cavalera, Tom Angelripper and Protector's Olly Wiebel. There's enough brutality and character to his voice that he can transform even the most mundane segment of the album into a suitable head injury.

As hinted at, this Book of Covetous Souls reels the listener in strongly with its first few chapters. "Extreme Corruption" is powerful enough to inspire a street riot via what must have been a limited number of Austrian thrashers, with mace and baseball bats or billy clubs and deep in the sauce. Tight rhythms, whether they're infinitely memorable or not, a strong lead, and Jo's skull hammering vocals all lead to a pretty cool 'march' thrash near the close of the track, upon which another searing lead develops. This is a good song, the Kodak moment for this particular album, but not the only one. "Brutalistic Terror" is a laid back piledriver with a flair for melody and a few steps of escalating speed and tension, while "Psycho Trilogy" delivers a clinical, semi-tech feel through its cavorting axe momentum. "Sergeant B" kicks a load of buttocks while taking a tall draft from a Pilsner glass, and "H.O.G." is even more lethal, like a mixture of 80s Destruction and Sepultura. There are really no 'bad' tracks anywhere to be found, so you might also injure yourself to "Welcome Terrible" or the partial title track "Covetous Souls". The 10th, untitled track here is also quite good, reminding me of mid-paced Vendetta or Tankard.

Book of Covetous Souls is not the caliber of album that could ever challenge its vicious German neighbors or the explosive titans of the Bay Area, but I have to think it's somewhat of a lost classic as far as Austria. There were very few albums of its type from that country, and most of the others came far too late into the game. For this reason, any thrasher worth his/her salt should probably check it out. You won't visit its pages very often, but it's well produced and tight enough to enjoy when you are in the mood for this specific style. There's a pervading sense that you've heard much of its contents before, as with any band unfortunate to emerge onto the speed or thrash metal scene in the 90s, but Ravenous managed to wrangle those feelings into an effective measure of destruction that sparks only a positive memory several decades into its existence.