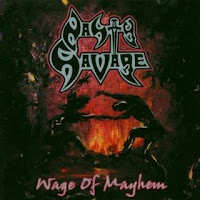 Penetration Point was not only my favorite Nasty Savage album and the high point of their career, but it was also their 'last' album, at least until a few reunion shows in the late 90s encouraged the band to give it a go once more. Considering some of the members' output (puns in t-minus...) like the scatological, shitty metal band Gardy-Loo or the fairly weak death metal of Lowbrow, this was probably a wise decision. So come 2002, Nasty Savage had returned, with the same lineup as they left at the end of the 80s. The following year, they dropped this new EP, which featured a pair of new tracks and a re-issue of the band's Wage of Mayhem demo from 1984. In a way this was a clever tactic, because if the band's newer material didn't live up to their legacy, at least fans would be suckerpunched by having the demo in their possession, at long last.

And it turns out a necessary tactic here, because while the style of the new tracks is not a far cry from Penetration Point, the songs seem very light on the frenetic riffing that marked the band's signature sound 14 years prior. Nasty Ronnie is still spitting out both his highs and lows, and the guitars can rock a solid solo, but all the riffs leading up to this in "Sardonic Mosaic" leave much to be desires. The guitar tones give the material a somewhat darker feel, which they'd carry forward to the Psycho Psycho album the following year, but it really doesn't matter when so much of the writing is weak. "Wage of Mayhem" is the stronger of the new cuts as far as the riffing, but the vocals in the verse seem a little awkward, even for Ronnie, who is like the king of awkward. It doesn't help that the lyrics are a sort of stream of consciousness down through the band's past...it's probably enough just that the band have included their old demo.

Alas, since both of the new compositions have failed to deliver by some means or another, it falls upon the original Wage of Mayhem demo to carry the currency out of the fan's wallet, and it does sound pretty sweet! Two of the tracks here have appeared on the bands albums, in a more aggressive form: "Unchained Angel" was on the Abstract Reality EP, and "XXX" was on the Indulgence album. But it's nice to hear these versions, which possess a little more of the classic metal fire that dominated the s/t debut. "Savage Desire" opens with one of those very familiar riffs to "Am I Evil" or about half of Venom's old songs, but it's still one of the better songs on the EP (they'll later redo this track and tack it on Psycho Psycho). "Witches' Sabbath" is a moody NWOBHM-flavored rocker which gets by on its absolutely hilarious lyrics like:

Witches are sluts,
They should be burned at the stake!
They deserve their fate!

And that's all she wrote for the Wage of Mayhem EP. Basically, it's a means to own the original demo with a few shoddy new tracks tossed on there as evidence that the boys are back in town, and that there's no stopping them! Only the new songs were relatively weak when you compare them to the material from Penetration Point, Abstract Reality or Indulgence, and things weren't looking all that good for their reunion. So when the pressure is turned up, and the band has to deliver an entire new album, how will it stand up to the past? We shall see. Unless you're one of this band's most ardent fans (and one who doesn't have a copy of the 1984 demo), I cannot in good faith recommend buying this.

Verdict: Indifference [5/10] (so let this be the post script)