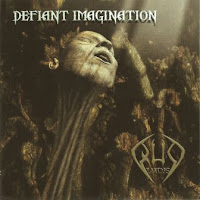 Defiant Imagination is the third album of the Canadian Quo Vadis, and arrived with some very high expectations, as their sophomore effort had created a stir among the modern metal sect. A Canadian melodic death metal band worth its salt? Impossible! The story of this album is quite interesting, as the drums were recorded first and then the guitars and harmonies re-written to run consistently above them. You can kind of hear it, too. The drums are intense and heavy, with many thundering double bass rolls and a nigh constant barrage of aggression. Unfortunately, the rhythm guitars here are for the most using the stock Swedish sensibility for melodic predictability, with some later Death-like progressive flourishes mixed in, and the only times the album really grows more interesting is where the band diverts away from this meandering miasma of dulled down inspiration.

Although I would disagree with the popular notion that Defiant Imagination is the band's best album (listening back, I'd have to argue that their peak was Day Into Night), there is one draw to the album that you did not hear on the predecessor: Steve DiGiorgio. In the years leading up to this effort, several of the band's core members had departed, including original bassist Remy Beauchamp (who was a talent in his own right), so Bart and Yanic hired on DiGiorgio for the recordings. Now, I've never been extremely impressed with DiGiorgio's talent as a songwriter, but as a bass-merc on a progressive/melodic death metal album, he excels, and his adventurous, fluid performance is perhaps the one thing here that keeps the ship from sinking below average. The new vocalist Stéphane Paré is decent, but not much to get excited over. He reminds me of Mikael Stanne (in fact, this entire album reminds me of a more technical, extreme alternative to Dark Tranquillity), albeit less powerful, with a stock, monotonous grunt that lacks much in the way of emotion, even when backed up by the occasional gang shout. I think I honestly preferred the more Carcass-like tones of his predecessor, but this has never been a band to excel in the vocal department.

If Defiant Imagination had been released today, it would probably be considered another in a long list of forgettable melodeath records with generic (if busier than usual) mosh breakdowns. But at the time of its inception it was still slightly more progressive than average, and I should note that, aside from a few of the lyrics, there is nothing quite so pedestrian about the effort that went into this. Writing around drums is an interesting prospect, and the bass is a marvel, but I find it pretty telling that the two tracks to stand out here were the operatic interludes "In Articulo Mortis" and "Ego Intuo et Servo te", which demonstrate that the band has not fully shaken the classical influence and gothic experimentation of their debut Forever... from their systems, but at the same time, the male and female vocal performances are very good in these two, short pieces. As for the rest, they dance along like sprites celebrating in a Swedish glen, invisible or uninteresting to my mere mortal perceptions, the baubles of bass being the one distraction to perk my ears and tilt my head.

"Silence Calls the Storm" and "In Contempt" explode past in a cloud of boring guitar riffs, with little but the bass and concrete drumming to enthrall. It's not until "Break the Cycle" that the band tries something more interesting, a slower, dynamic track with great bass cycles and a subtle touch of prog and funk that captivates at least for a few brief seconds. Sadly, the lyrics here are dragged down by a pastiche of cliches and forgettable 'inner struggle' lines like 'Open your eyes, open your mind', 'life goes on', and 'the road to hell is paved with good intentions'. Well meaning, positive and inspirational, but very distracting when they're being barked at you in an accented growl. The kind of lyrics you'd essentially expect from most other North American metalcore/melodeath bands more passionate about the product and placement than any lasting imagery they could summon. "Tunnel Effect" is much like the first two tracks on the album, almost impossible to remember even seconds after its conclusion. Of the rest, "To the Bitter End" and "Dead Man's Diary" at least offer some melancholy and precision melody, though nothing that would warrant an immediate re-listen.

There are certain components of Defiant Imagination which destroy the utter sum of its emotional resonance, so some credit should be given for its unusual manifestation and the slow process by which it was assembled. The bass and drums are prim and polished, perhaps too much for my own tastes, but there is no denying that this rhythm section put in an enormous effort. Where the album becomes lackluster is in the dressings. The guitars, while proficient and often diving into the technical precision of the prior album, are simply not that invigorating. The vocal performance, while not 'weak', is sodden and average, the type you could have phoned in by any more established growler on a binge. The two opera segues are well done, but they account for only 2 minutes of the 40 here. The rest of the tracks become more interesting the further they venture away from the rather humdrum, melodic death core. This simply doesn't occur with enough frequency, and even when it does, the results are only mildly curious.