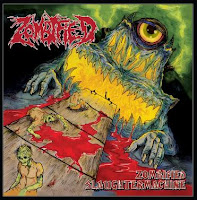 Though the early Swedish death metal style is one I've long treasured, I can't help but wonder when this endless wave of bands celebrating the sound is going to level off. Having a dozen or so of these bands manifest in the past few years was acceptable, and even fun, but it seems with each new crop the style is being bludgeoned into over saturation, butchered and thrown into the drink to swim with the fishes. By all accounts, Zombified are a fun band. They've got a cool album cover, a nice old school logo and a great album title. It's like Paganizer's Scandinavian Warmachine, but much more undead-like. And comparatively, Paganizer is not far off, along with a great many of Rogga's other retro death metal projects. In fact, I was half expecting to find that Rogga himself was in this band. But as far as I can tell, this is a singer known as VonPest.

This is a band that don't take the metal too seriously, and it's an album the listener doesn't have to take seriously either. What they do have going for them is a crushing production, with a thick, ominous guitar tone that is instantly going to appeal to anyone who isn't accustomed to it, or those who just want to feel like their skull has been steamrolled when listening to a death metal album. As for the riffing, it's what you expect now with so many bands revisiting this style (and so many older bands still kicking around). Rooted in Dismember and Grave, with a little Bolt Thrower for kicks, and a healthy dose of Disfear or Nasum's grinding to spice up the beats. The bass is loud and proud, and it adds quite a lot to what might otherwise be a rather hollow feel to the riffs. Speaking of riffs, this band does not have too many which stand out, but they make do with what they've written and assemble them into decent tracks like "This Saw Was Made For Killing" with its nice, ripping lead; the grooving, powerful "Sleepless" and "The Master Destroyer".

All Zombified tracks are not created equal, and I tend to lose interest when the band shifts into their more punkish, grinding generic qualities. The energy is rampant, but the guitars are simply not that interesting when they spit out riffs you've already heard (or heard close approximations of). As an overall work, Zombified Slaughtermachine is at least entertaining for a spin or two, but leaves absolutely nothing to remember it by unless you're a complete die hard for the band's light hearted horror aesthetics. They've definitely got the production values down to create a crushing force across the frontlines of the Swedish retro death/grind scene, but they could use a few more tracks like "Sleepless" which bowl a strike rather than a few pins. Compared to other bands like Tormented who have a far more grim, memorable take on the style, Zombified seems a little too forgettable. But as far as a debut album, it's tightly written and well engineered enough that a few deadbeats will devour it and ask for seconds.

Highlights: Sleepless, The Master Destroyer, This Saw Was Made for Killing