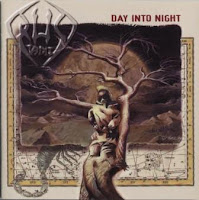 It's obvious that the Canadian Quo Vadis put the intervening years (1996-2k) between their debut Forever... and this sophomore effort Day Into Night to good use. While it's not perfect, and I still have a difficult time remembering the specific tracks and riffs when I'm not actually listening to them, the increased production standard is a boon to the listener, allowing he or she to digest the band's manifold intensity as it was intended, with a clear and crisp mix that truly brings the guitars out to the fore. The band had ditched the more experimental frills for this album, i.e. you won't hear as much spoken word with violins, or further flirtations with female vocals.

This is also a more aggressive record, but much of its excess energies are transferred by the mix. The band still uses a few different harsh vocal tones, but they seem better streamlined, and they are perhaps the primary reason this album reminds me of the last two Carcass full-lengths, due to the balance of the vox with the highly melodic guitars that are rooted in thrash and classic heavy metal. Perhaps it is best compared to a mix of Heartwork/ Swansong-era Carcass with Arch Enemy's Stigmata or Burning Bridges, but it doesn't sound quite like any one thing, so the air of authenticity is remained, especially when you consider just how shitty the majority of American melodeath bands were (whether from the States or Canada), having already begun the infusion of metalcore breakdowns with melodic Swedish guitar riffing and the mix of awful clean and overbearing harsh vocals.

No, Quo Vadis were never quite so lame as these bands, and Day Into Night is a solid album into which obvious effort and creativity were placed. It still suffers from a lot of the 'straight through both ears' syndrome, but at the very least there are some songs which offer a few melodic, passionate surprises in their depths which manage a means of emotional escalation, as opposed to the debut which was a writhing bore. Much of the material alternates between mid-paced rhythms and technical, melodic thrashing outbreaks.

"Dysgenics" is a steady rocker with a few chugged breakdowns and a rock & roll spin to it which reminds me quite a lot of something like "Keep On Rotting in the Free World" by Carcass. "Let It Burn" and "Hunter-Killer" are fairly complex compositions which throw a number of tempo changes your way, and the latter once again reminds me of later Carcass due to the vocal interaction with the melodic, forward thrust of the guitars, though the musical tone is far lighter. Probably the one song I truly enjoyed on this album, "On the Shores of Ithaka", has a few surprises in store, starting off with bone crunching melancholy and later assuming a breakneck speed in which the guitars evoke a fallen majesty through their sorrow-laden speed and complexity. I also prefer this deeper vocal tone. The closer "Cadences of Absolution" is also a pretty interesting track, with the better vocals and some very interesting rolling rhythmic outbreaks through which the guitars thread and thrust.

In fact, most of the songs do at least have 1-2 riffs which tickle the ear upon first listening, but not so much that you'd want to keep listening over and over. The album sounds as if a good chunk of money was thrown into its production (supposedly it was, courtesy of Hypnotic), and perhaps a little more refinement and writing was in order to merit the expenditure. As it stands, Day Into Night still feels like a melodic death metal band trying to substitute flights of frenetic technical frenzy for better songs that you stick in your brain long after the fact. It just wouldn't cut it, since you could turn your ears to Sweden and pick up the frequencies of their blustering melodic death metal scene, frequencies which offered both emotional and visceral impact (Soilwork, In Flames, etc). In some ways, though, the band's musical fluency makes a lot of sense, since they were coming up in a scene that included bands like Cryptopsy whose major selling point (that would spread like wildfire through the metalcore-thick ranks of US death metal fans) was the extremity of the guitar work. Quo Vadis made for a nice melodic counter to such hysteria.

There's no mistaking the superiority of this album to its predecessor Forever.... There, in 1996, was a band not worth a second listen, but here you'll discover an obvious thirst for perfection, a hunger for better songwriting and crisp, busy guitar riffs that would probably have the six string nerd digging for tablature if he wound up taking to them. Good drums and bass remain here, and it's one of the finer turn of the century Canadian metal albums as far as its high level of studio polish. It's a damn shame that so much of this sinks into the port lobe only to eject itself through the starboard side a mere few moments later.

Highlights: On the Shores of Ithaka, Cadences of Absolution