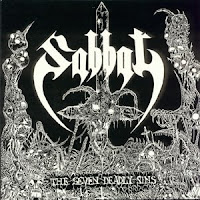 Like many of the masters hanging out at the margins of the cult metal scene, the evil clergy of Sabbat introduced themselves through a number of 'getting to know you' EPs and demos that spanned the 80s. It wasn't until 1991 that they would unveil their first full-length blasphemy Envenom, and by that time they had already established themselves as one of the most sinister fringe acts in the international abyss. And considering Japan's love affair for all things melodic, glam and speed metal in the 80s, it can't have been easy for this diabolic band who had far more in common with Venom, Bathory, Slayer and Mercyful Fate than Loudness, Anthem and X Japan. Yet they persisted, and today they command a vast underground respect, a massive body of releases through any do it yourself label that would have them, and several worldwide tours under the bullet belts.

The Seven Deadly Sins is just one of many EPs the band issued prior to their debut, and due to its limited run of 500, chances are you'll have to find the three tracks gathered on other releases or use whatever illicit means you can to acquire them. There are about 12 minutes of music here, with "Possessed the Room (Kanashibari)" clocking in at half the play length, and the other tracks only half as long as that. Like most of Sabbat's better songs, "Possessed..." is a horrific experience which feels like a Japanese King Diamond sniffing lines of cocaine as he counters his shrill falsetto shrieking with some death growls. The riffs here rock, if simply: Gezol's bass is loud as it swishes around the bottom like an abyssal catfish, sucking up the excrement of Elizaveat's fuzzy guitar tone. The solo is begins all sloppy and twisted, then it rages with clarity, and the band never once detracts from their unique atmosphere.

The primary riff of "Sacrifice of an Angel" sounds extremely similar to Death Angel's "Evil Priest" (from The Ultra-Violence), only with Gezol's deeper, disgusting vocals. However, the rest of the track diverts into another wild lead with some hot lead wardrumming over the bridge, as the vocals break into a dirty rhythmic chant. "Crying in Last" is actually my favorite of the three tracks here, with a similar riff to "Sacrifice of an Angel" but a little more spastic and with a built in breakdown where the bass hammers and the band readies itself for another Satanic penetration.

Acquiring this EP would be a tall order, so I recommend instead tracking down a copy of the 2004 compilation Sabbatical Holocaust, which contains not only The Seven Deadly Sins, but a slew of other demo and EP tracks culled from the band's 1985-1990 output. The good kind of compilation that saves you a whole lot of pain if you're not an obsessed, deranged collector of demos, vinyls or rare CDs. These aren't numbered among the band's best songs, but the material stands on its own as another example of how Sabbat manage to convert elements of filthy 80s thrash and speed to the blackish, horrific environment that would later spawn some of their finest works.