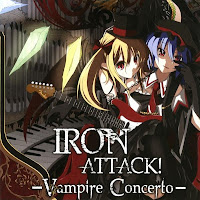 The life of a Japanese instrumental metal shredder is an interesting one, hovering at the crossroads of a niche of showmanship which honestly died with the peak popularity of 80s shred gods Steve Vai and Joe Satriani, and the fandom of manga, anime and video games that are far more prevalent in today's world, yet only rarely have a taste for such relics. Still, a number of six-string samurais carve forth through the rank and swell of the odds stacked against them and come out on top, letting their imagination spill forward through both their impressive dexterity, virtuosity and compositional skills. Of these, Iron-Chino, or Iron Attack is probably the most consistently entertaining, as he churns out album after album of material that could easily find a home in a video game.

Vampire Concerto is his 14th effort since 2007 with this project, and it's not a lot different than most of the rest, albeit directed towards a more neo-classical, gothic flavor due to its theme of haunted nights, vampires and other cartoon trends that are immensely popular with the fandom of manga and anime (there are a great number of popular titles, including PC dating games, that involve cute and probably underaged bloodsuckers and their idealized adventures). Musically, if you could recruit Yngwie Malmsteen to write the soundtrack for a Castlevania game, this might indeed be the result. Iron-Chino is an immensely talented player able to flutter about his frets with little strain or effort, through nigh endless scales and arpeggios, and he does this repeatedly across solid rhythm guitar tracks, drums and synth-heavy atmospheres.

The true challenge for this sort of release is to keep you interested with the climaxes in the leads and their ability to morph across a shifting rhythm, and Vampire Concerto is largely successful with this, though it's not as if Chino is employing much in the way of novelty or innovation, a practice very much alive when the 80s heroes were releasing this sort of album. The intro to the album is a nice piano/acoustic duet beneath with a synth swells and light drumming commences, but then most of the full songs here employ a very similar atmosphere, with only mild variations in tempo. Some of the more glorious include "Satellite Phantom", "Sign of Wizard's Melancholy", and "Killing Under a Scarlet Moon", but in all honesty, you could consider this a single, 35 minute song and get just as much out of it, since so few of these tracks range outside the box.

As a backdrop for video gaming or even a fast night drive through the city or countryside, Vampire Concerto works almost as well as anything else in Iron Attack's generous back catalog, but I found the lack of variety here a little less compelling than some of his past works like Dead Heat Refrain or Far East Judgment. Still, it's difficult not to be impressed by his playing and ability to churn out so many albums in such order, without any really suffering in quality. Formulaic they may be, but most serve their function rather well. For the dwindling cross section of shred fans, otaku, Japanese horror gamers and visual kei/power metal connoisseurs out there, this is sure to impress for at least a few spins.