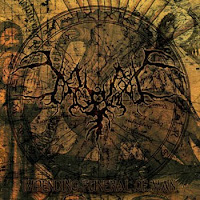 Last year's Set Ablaze the Kingdom of Abraham EP not only introduced me to the disgusting, primal wall of force that is Begrime Exemious, but also answered the eternal question that had been sloshing around in my wet brain for decades: what would happen if you just took every one of your classic thrash, death, speed, black, grind, and doom influences from the 80s or 90s, threw them into a blender with a few pounds of raw meat and then choked down the results until you were inebriated? That was a fun if short cocktail, with a nifty Autopsy cover tacked on, but if it could be attributed with any crime (beyond the inherent blasphemy of its creation), it would be the pangs of thirst that were left at the back of my throat as I anticipated more...

Well, a little over a year later, the palate can finally be satisfied with the unsavory sounds of the first hellish full-length album from the Canadian butchers, a 44 minute crash course in uncaring, unswerving, beautiful negligence of all the annoying trends and cash-ins that have plagued their chosen art for nigh on decades. Impending Funeral of Man sounds as if a warband of very shaggy men were frozen in their jam space during a blizzard in the 1994-95 season, only to thaw a decade into the 21st century to mete out the bludgeoning atrocities of their influences on an unsuspecting world of Necrophagist wankers and frog-tossing invertebrate Devourment fans. Begrime Exemious essentially have an encyclopedic knowledge of all the good stuff from that bygone era, and they hammer it all together like plates of mismatched armor. You can hear the mix and mess of Order from Chaos, the infernal death siege engine of Incantation, the crash and speed of Slaughter, Bathory, Mayhem, and a hundred other formative thrash, black and death metal artists, plus the subtle undercurrents of death/doom and grind.

Impending Funeral of Man is for the most part a fast and filthy album, a corridor of violent, suffocating aberrations with only occasional alcoves in which to stop and gather your dying breaths. But these pauses are plentiful enough that the album achieves an overall balance of dynamic diabolism which allows you to barrel straight through it like a drunken fiend in a brothel of succubi, satisfied with the rising and falling of tempos. Tracks like "Morbid Invocation" and "Archfiend" (the one track that re-appears from the prior EP) beat upon you relentlessly, but never forget that they're actual decent metal songs, with good if sporadic lead work and a slight touch more atmosphere than you'd initially expect. One of my favorites on the album was "Filthy Sodomites of Christ", which rolls along like a rusted tank with headphones on, listening to a mix tape of Hellhammer, Autopsy and early Morbid Angel. Another is the digestible, violently melodic "Ancient Crypts Asunder", with its winning mile of raw leads and dank, sincere vocals.

"Incipit" took me completely by surprise, an atmospheric instrumental dowsed in acoustic melancholy. Closing track "I, Iconoclast" is also noteworthy as one of the most raging and bombastic pieces here. In fact, I think I enjoyed every track with the possible exception of the "Psalmody of Sacrificial Blaze". It's 9 minutes long and divided into three segments, the first of which ripped my face off. Somewhere around the middle I got lost until the slow leads and doomy tones of the closing moments stirred me, but ultimately even this track is at least good enough. The album is hardly over-saturated with instantly memorable riffing, but that's not really the type of band this is. They succeed through an overall sense of punishment, and a courage to branch out into whatever direction serves the song.

Begrime Exemious is very much an old school band, or rather an amalgamation of old school sounds that probably holds no real interest for the attention starved younger fan of deathcore or technical knob slobbing. But their strength lies in the fact that they emulate not one style or act in particular, but the entire spectrum of extremity that once existed. There is no boring, endless blast work here. No trendy noodling. No cheap breakdowns. Impending Funeral of Man benefits from a grounded, raw mix which would be very easy to reproduce in the live setting, and to that effect, they are one of the most honest sounding bands you'll hear today. I was very surprised that a Nuclear War Now! or Hell's Headbangers had not picked up the band after the previous EP, since Begrime has that center of appeal which could easily transfer to fans of a band like Goatlord, Nunslaughter or Blasphemophager.

Alas, it seems they've got a cool new label to do right by them, and enough diversity in their sound to play alongside nearly any death, black, thrash or death/doom bill, so there's not a lot stopping them. As someone used to hearing only the more tech inspired death approach of a Neuraxis, Cryptopsy or Martyr coming from Canada, it's a massive, refreshing plus to see my northern neighbors throw such a potent incendiary unto the battlefield of revival extremity that has promulgated internationally in these past few years.